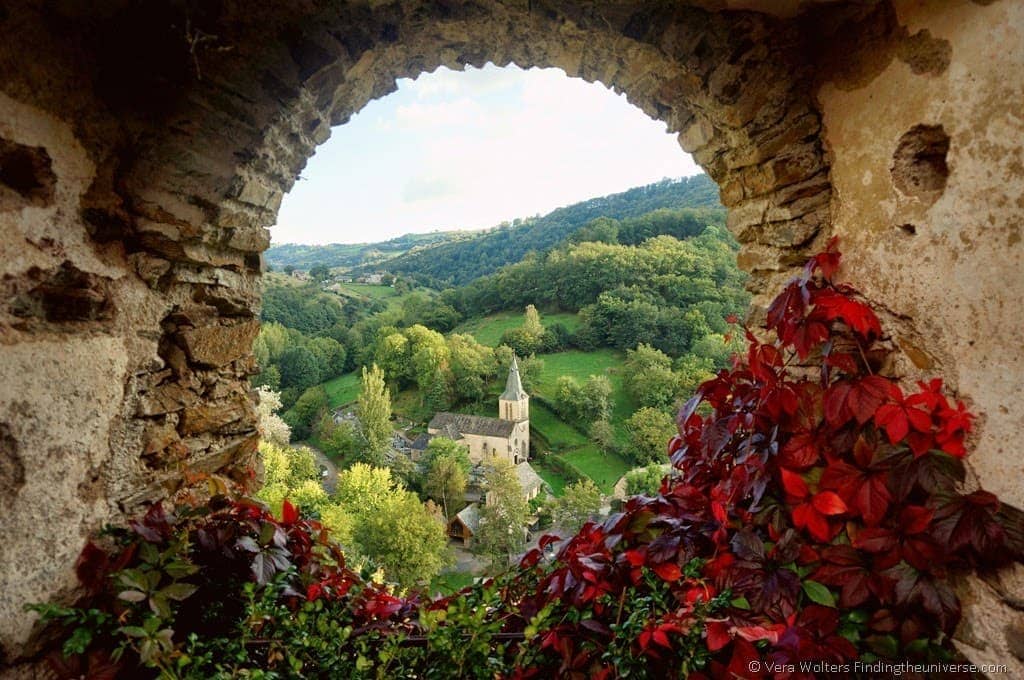 Home » Destinations » Europe » France » Belcastel–The Middle Ages are Alive and Kicking!
Finding the Universe contains affiliate links, meaning if you make a purchase through these links, we may earn a commission at no extra cost to you.

And we’re in Southern France again, once more in the beautiful Aveyron region. This is the part of the country which sports most of “The most beautiful villages in France”, and one of them is picturesque and idyllic Belcastel, on top of which sits a splendid château.

“Ah, well, with a name like that, how would it not be pretty!”, you say. And you are right, but originally Belcastel didn’t mean ‘beautiful castle’ at all: the name originates from the Occitan language, where ‘bel’ means warrior and ‘castel’ a fortress.

That’s because when it was built in the 11th century, romantic homey châteaus weren’t quite in vogue yet. “Ain’t nobody got time for that!”, as we might say today, because in medieval times castles were designed and built solely for defense, and Belcastel was no different. Absolutely nothing was left to chance, from the site chosen to to the way a staircase was built to the tiniest hole in a wall – nothing. Hence, this wasn’t a ‘beautiful castle’; it was a serious ‘warrior fortress’. 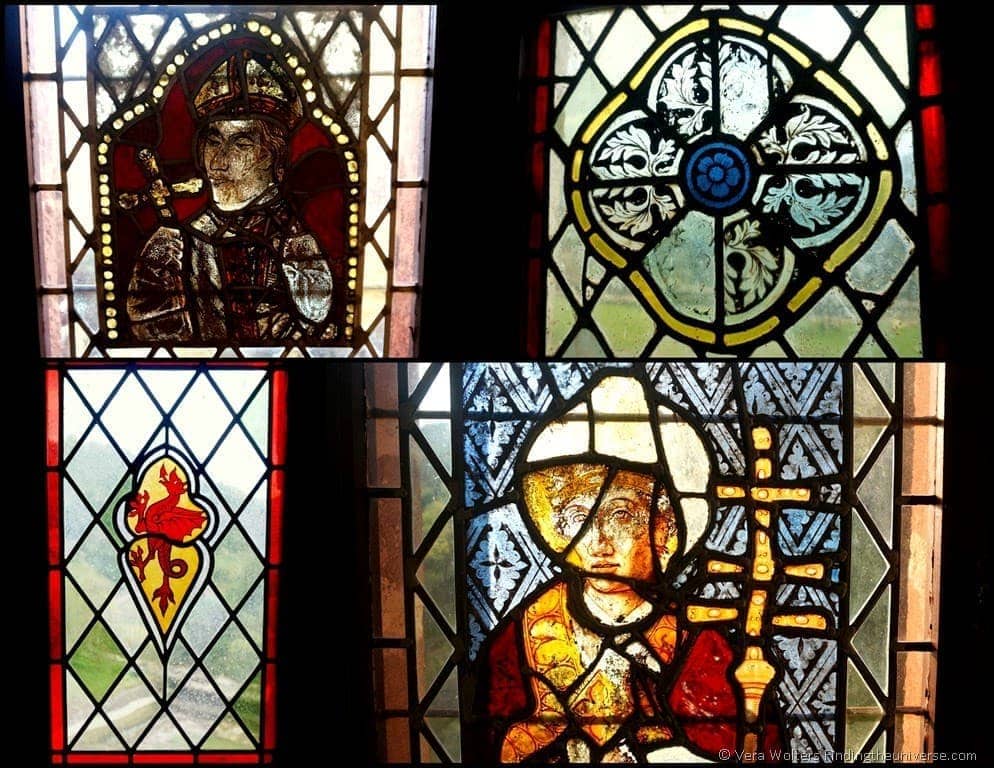 And as that, it did really well: although attacked on several occasions, it was never conquered. Which doesn’t mean it effortlessly made its way throughout history unaffected: in the 19th century, it was used as a quarry, and by the time the French Ministry of Culture declared it a historic monument in 1928, not much but ruins were left of its former glory.

In fact, Belcastel might never have become one of the “Most beautiful villages in France” and I probably would not be writing this post today if fate hadn’t brought a man to the ruined castle who would change it all: Fernand Pouillon.

“Uhm… who?”, you’re asking. Well, I didn’t know him, either, but this guy is not just somebody random: he was a well-known French architect and author (born in 1912), and before you start yawning: he did some crazy stuff! At one point in his career, he was sentenced to jail because he had been both the architect and the building contractor in a project, which at that time (1961) was illegal in France (that’s not yet the crazy bit). 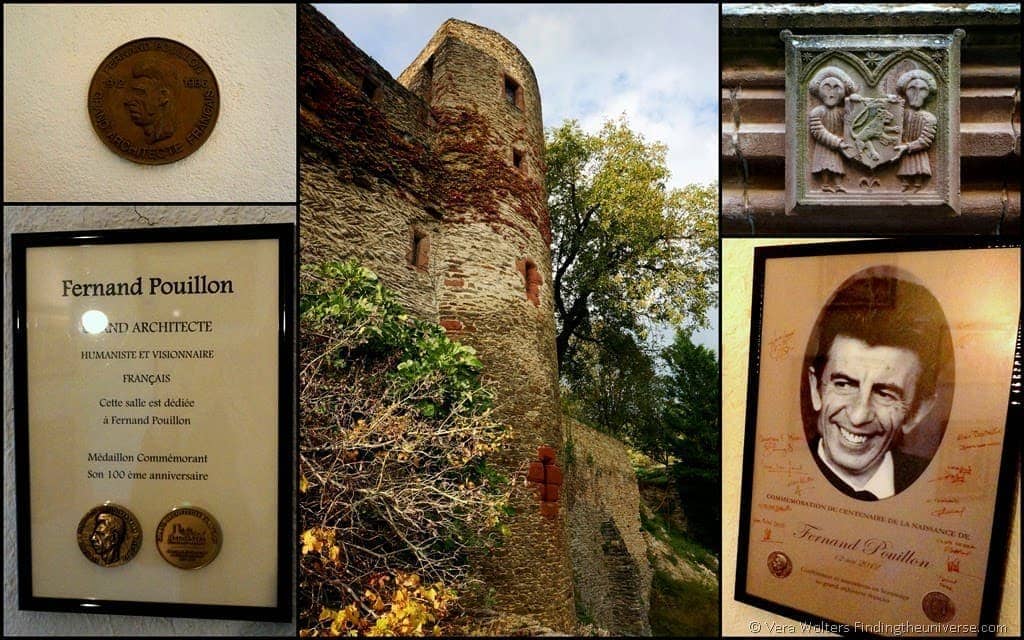 So this is not the most exciting reason someone is thrown into jail for, and I wonder if Fernand Pouillon thought that it was also not a very good reason, because after 18 months in prison, he went and tried to escape. He staged a hunger strike and pretended to become ill, due to which he was moved to a minimal security wing. There his brother smuggled in a rope during a visit, which Pouillon used to climb out of the window in the third floor once night had fallen.

He managed to properly escape and left France for North Africa. However, in 1963 he came back and proved himself innocent of the crime he had gotten sentenced for in a very sensational trial. The court still ruled him guilty of escaping, so he had to go back to jail, but it was a reduced penalty. Making the most out of the down-time, Pouillon then wrote the  novel “The Stones of the Abbey”, which won a major literary prize. As you do. 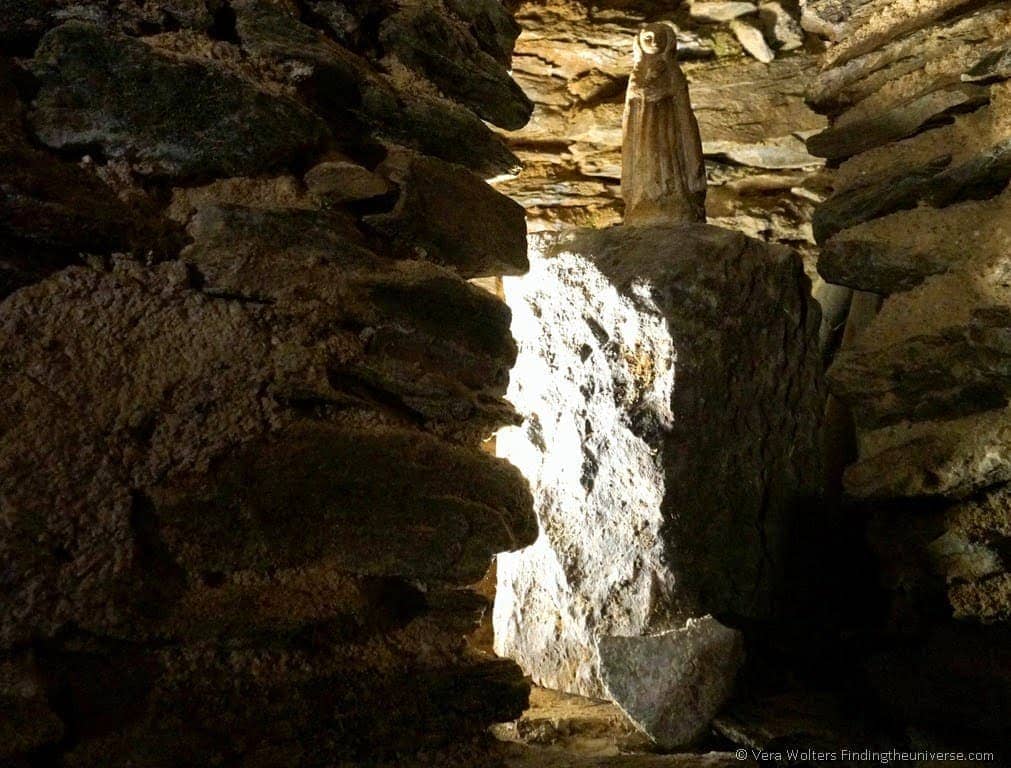 Which is just the short version of an excerpt of his life. How Hollywood has not turned this all into a movie yet, remains a mystery. Anyhow, so at a much later time, Fernand Pouillon came to Belcastel, looked at the ruins – and had a vision. Otherwise there is no reasonable explanation for why anyone would have bothered with the sad piles of medievalish rubble. But bother he did, and he dedicated his time to turn the site into the home of his dreams.

Which it became, even though it took almost ten years. He first laid eyes on the ruins in 1973, purchased them in 1974, spent years researching the history of the property and ended up restoring a lot of it to its original state, while also turning it into a home for himself. And all the work that was done, was done with – wait for it – exclusively medieval building techniques. I kid you not. No cranes, say for the beams; no modern machinery. Right. I told you: dedicated! 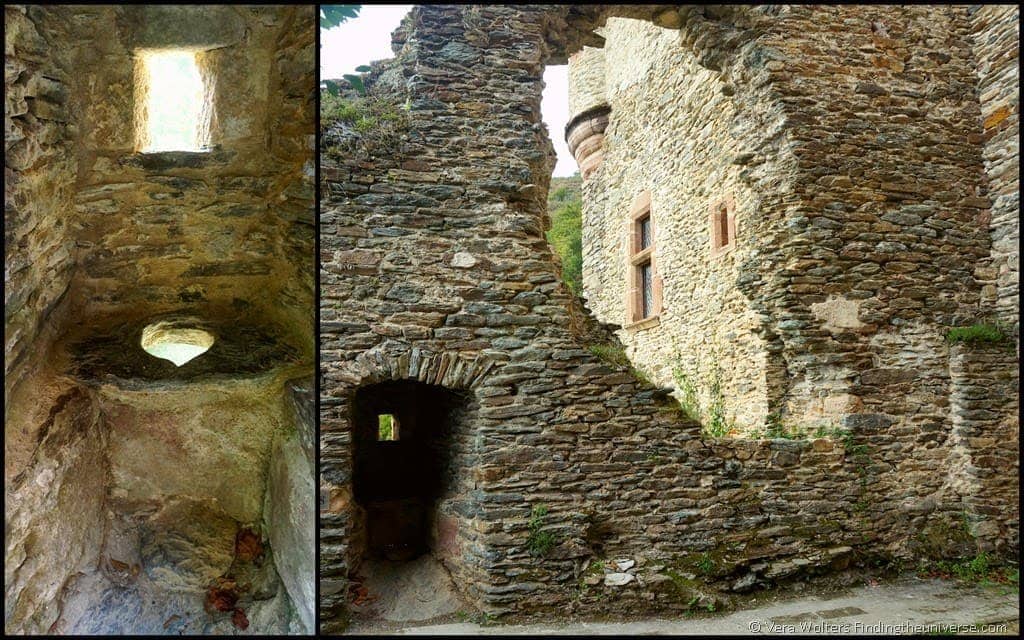 In 1982, the Château of Belcastel was finally restored again and it remained the private residence of Fernand Pouillon until his death in 1986. His grave is in the cemetery of Belcastel, and, as it was his wish, is unmarked; just like those of many, many craftsmen before him.

His work also inspired the other inhabitants of Belcastel to transform their village into what is now known as one of “The most beautiful villages in France”, and rightfully so.

So this was Fernand Pouillon. Now to the castle. Ah, the castle! It’s not very big, you know; in fact, it looks quite cute from a distance. Don’t dig too deep if you want to hold on to that presumption – after all, it was a serious fortress and, you know, not-so-nice stuff happened. Look at the pretty flowers instead, breathe in the good air, enjoy the marvellous view, and feel just like you have stepped into a fairy-tale.

It even has a moat and a drawbridge! Very romantic, until you learn that under siege, the people of the castle would ‘poison’ the moat with dead animals, blood and faeces to prevent the enemy from swimming across. Which is super unromantic. 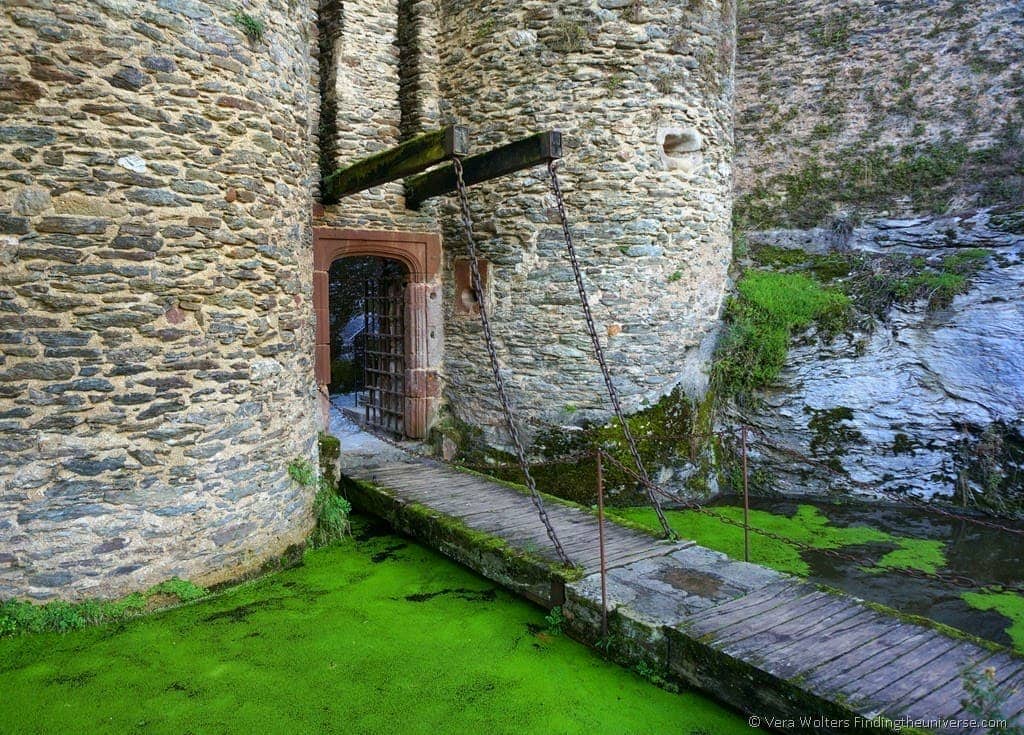 Then the drawbridge which is short and narrow, therefore easier to defend, especially when the walls have plenty of holes to shoot arrows through, and you can also drop rocks on the heads of anyone who comes too close. That is also probably the main reason why nobody tried door-to-door selling for vacuum-cleaners back then.

Then there’s a Knights’ Room which, together with what was once the private chamber of the Lord of Belcastel, exhibits a collection of original armour from the 15th and 16th century. Towards the end of the 16th century, when guns became more and more popular, armours were built lighter, so that the fighter was more flexible to dodge a bullet (bullets must have been slower back then). Before that the armours were so heavy that when you fell over in a battle, and the enemy was close, that was it: game over! You could simply not get up again in time. Man, they must have had so much fun back then. 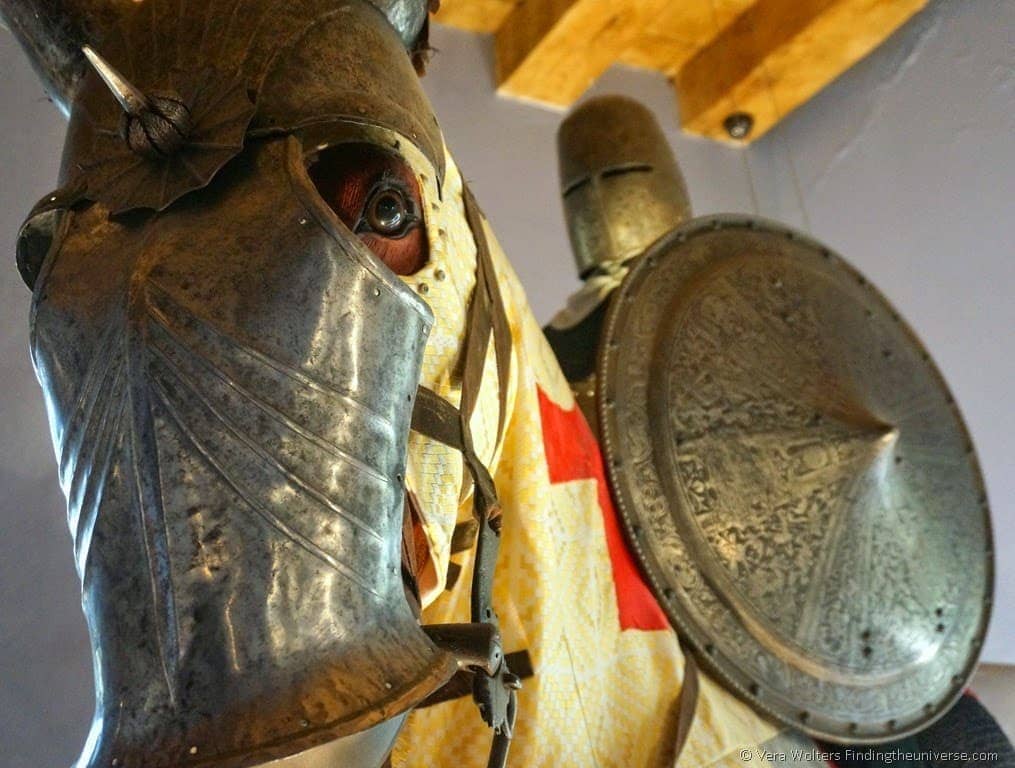 Which brings us to the prison. It consists of just one cell, and has a neat small hole in the ground, which might or might not have been used to get rid of the remnants of prisoners who had been tortured and chopped up here. Today it’s one of the rooms that function as an art gallery.

That’s right, after Fernand Pouillon’s death, the castle was bought by art gallery owners from New York, and so some of the rooms serve to exhibit art works curated by the AFA (Animazing Fine Art) gallery in NYC.

This is lucky, because otherwise we wouldn’t have a picture of the White Lady, the castle ghost. 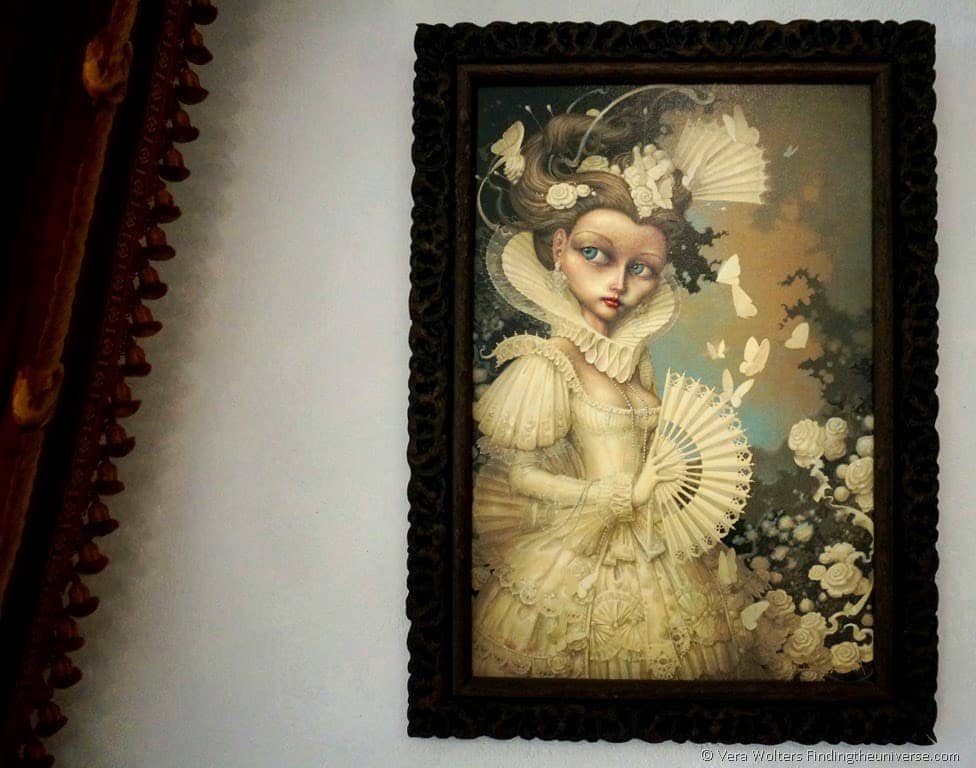 Castles without ghosts just don’t do it, am I right? This one is a bit of a gender-specific one, though: she can only be heard by men. When Fernand Pouillon witnessed her calling and whispering, too, he investigated the legend of the ghost and found it based on an actual incident: it was the wife of one of the castle Lords who had been thrown out of a window for her infidelity.

This is something I think you should know before I inform you that the castle has a private Tower suite you can book for your holiday. I hear it’s popular with honeymooners. Probably because the ghost and the legend inspire and set the record straight from the start: “If you ever cheat on me, I might throw you out of the window”- “If you ever throw me out of a window, I’ll haunt you forever”. Aw, love. 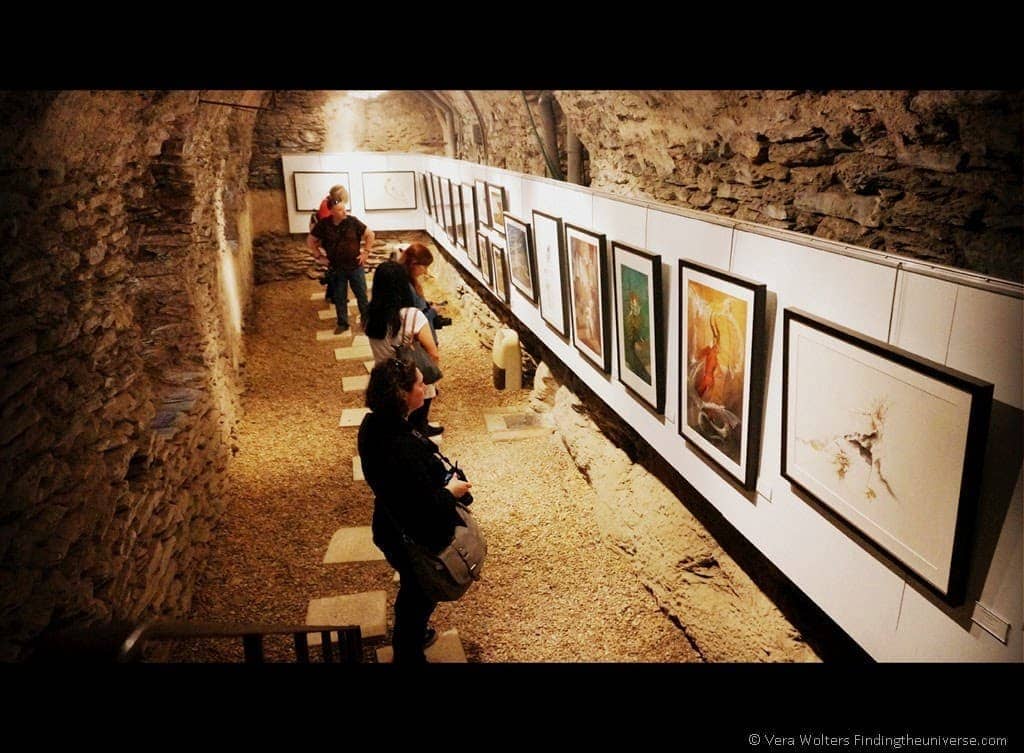 Anyway, but there’s another reason that might tempt people to stay for a while: the hidden treasure! There is a myth which says there was a secret tunnel from the chateau to a guard tower 1 km away, and that inside the tunnel a treasure was hidden, guided by guards. There is also a theory that the treasure might in fact be from the Knights Templar, and that various clues point to the chateau.

Funnily enough, Fernand Pouillon really did discover the entry to a narrow tunnel, and got VERY excited by that, but couldn’t afford to give it priority over other projects. And then he died. …So I’m not sure they would let you dig around in the castle, but apparently the tunnel started in the back wall of the prison. Also, the guards guarding the treasure inside the tunnel are most likely dead, so you don’t need to worry about them. Just saying. 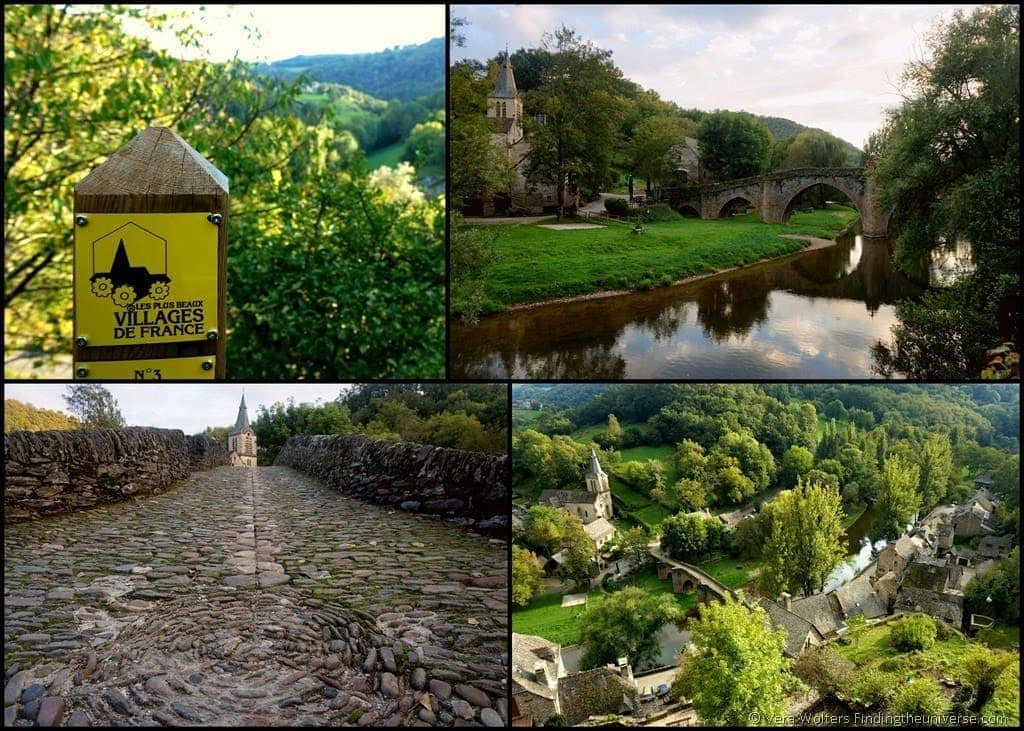 Of course, Belcastel is not just the castle. The village is extremely picturesque, and there are both a church and a wonderful bridge from the 15th century; there is the Blacksmith’s House and Museum, and last but not least, there’s even a restaurant with a Michelin star!

There are also other restaurants and places to stay – I was especially taken with the communal campsite right next to the river; such a beautiful spot (and very reasonably priced)!

So yeah, if you have a chance to visit Belcastel, do it! We got shown around the castle by Isi Dardinier (thanks a lot!) and were also given a Historical Guide to the castle which is one of the best ones I have ever read so far. It does cost 8 Euros, but I’d say it’s really worth it. If you decide to buy one in the castle shop, read it while you’re discovering the château – it will add so much to your visit!

And with that last tip, I’m out! I hoped you enjoyed the post – thanks for reading and safe travels!

We would also like to thank the Aveyron Tourism Board for introducing us to their beautiful region and hosting us, namely Jackie and Camille. If you’re from the UK, you can easily travel to Aveyron by train, by the way: return fares from London with the French Railway SNCF start at 140 GBP (don’t forget to check prices for first class, too – sometimes the difference is just a few Pounds!).