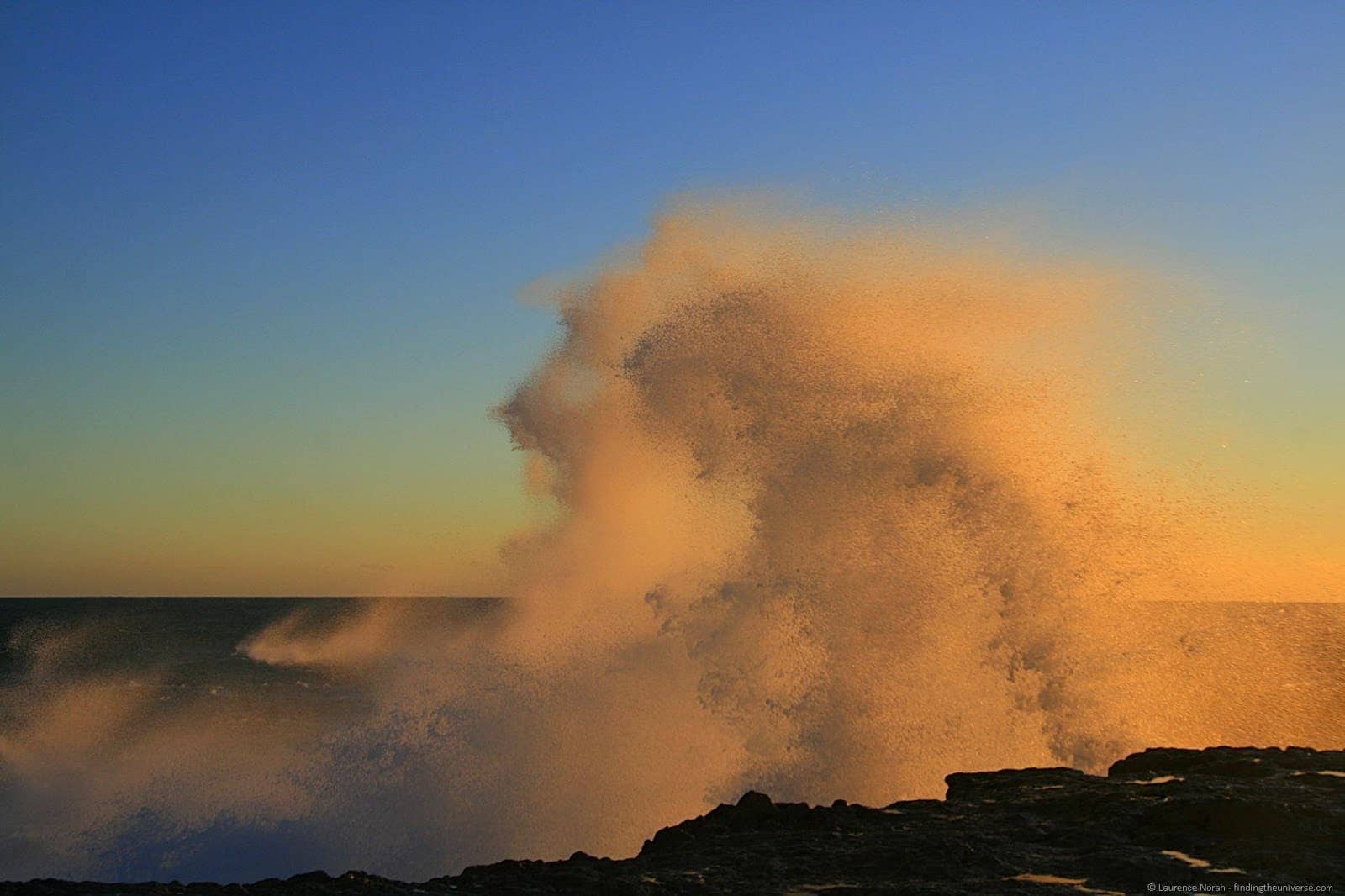 Home » Destinations » Australia » 4 More Highlights of Western Australia – Blowholes and pinnacles
Finding the Universe contains affiliate links, meaning if you make a purchase through these links, we may earn a commission at no extra cost to you.

Unfortunately, after much thinking, I have concluded that it’s just too much of an amazing place to be happy with only highlighting four spots.

Here, therefore, are four more spots that you should try and take the time to visit if you are lucky enough to have time to spare in this amazing state.

From desert to water, and mountains to sealife – you won’t run out of things to do in WA!

Where? Near Cervantes, 231km NW of Perth
Why? The Pinnacles are a series of weird limestone rock formations poking out of the desert sand, much like the fossilised fingers of some giant underground desert dwelling animal. Interestingly there is no agreed upon geographical explanation for their formation, with at least three competing theories vying for prominence. 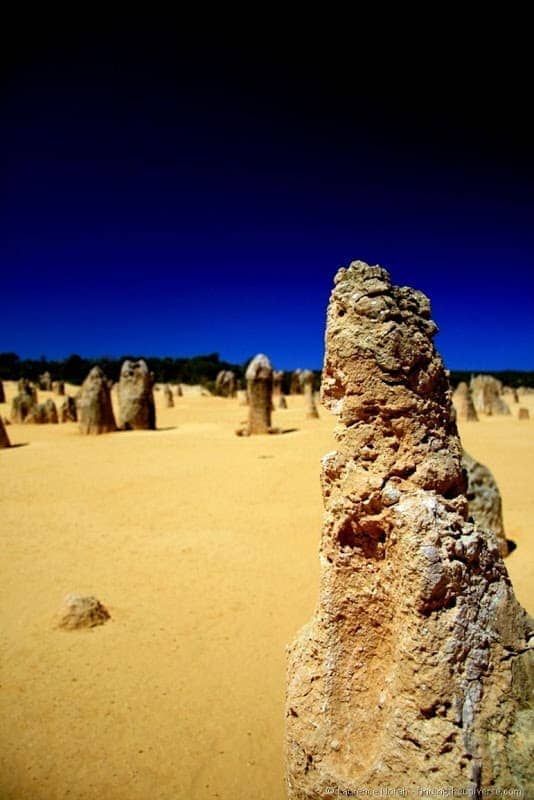 What can be agreed upon is that the rocks are absolutely spectacular. Jutting out of the fine desert sand, the contrast of the limestone against the immense blue of the Australian sky is incredible. You will find yourself wandering around the area, mesmerised, taking photo after photo.

The best time to visit is during Spring (August – October), when the temperatures are not so high and the wildflowers are starting to flower. Early morning or late afternoon provides the best light, when the shadows of the rocks play out across the sand.

Where? 75km N of Carnarvon, approx 1000km N of Perth
Why? This stretch of the Western Australian coastline is host to jagged rocky coastline   and massive, angry seas. Whilst this is not ideal for swimming or surfing, it is perfect for being impressed by the power of nature, as waves crash relentlessly against the seemingly unyielding shore. 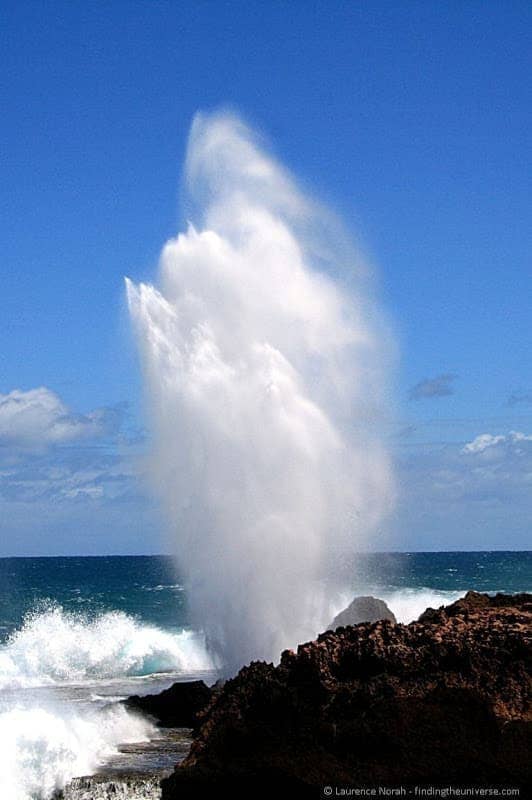 The blowholes, just north of Carnarvon, form a spectacular sight as water is forced through holes in the rock to explode in a plume that can reach over twenty metres in height.

Just a kilometre or so from the blowholes is a cheap camping spot on a sheltered cove with safe snorkelling in the lagoon and a beautiful white sandy beach to wander along. Folk come here for a while to stay, and there are a number of semi-permanent tin shelters which give the impression that you have found a post-apocalyptic village. Absolutely worth a visit.

Where? Shark Bay World Heritage Area, Peron Peninsula, approx 700km N of Perth
Why? Shark Bay is a giant bay formed by four peninsulas jutting off the Western  Australian coastline into the Indian Ocean, the largest of which is the Peron peninsula. The northern end of the peninsula is given over to the Francois Peron National Park, which is a must-see for fans of striking contrasts, wilderness and marine life. 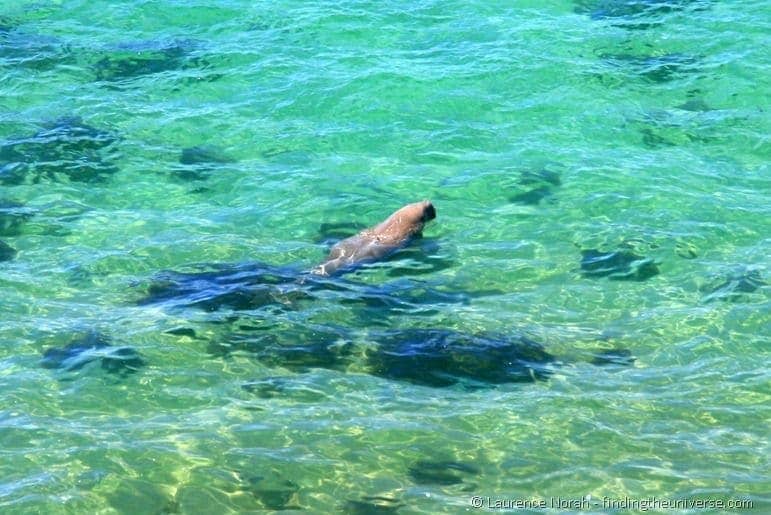 Here, red sand dunes meet white sandy beaches and the sparkling turquoise waters of the Indian Ocean. There is excellent snorkelling, bushwalking and wildlife viewing, particularly of the marine sort. At Cape Peron, for example, you can stand on the viewing platforms and look down at the fabulously clear and shallow waters, where manta rays, turtles, sharks and dolphins will cruise on by. Shark Bay is also home to the almost mythical dugong – oft mistaken for mermaids by sailors in times gone by. Presumably after many tipples of rum. 10% of the world’s population of dugong lives in Shark Bay, feeding off the massive seagrass meadows which are found here.

Beach camping is an excellent option in this park, which is four wheel drive only due to the sandy tracks. There is also, most bizarrely, a free hot tub at the park entrance, which is fed by geothermal springs. Finally, if you are in the Shark Bay area already, you would do worse than to visit the stromatolites of Hamelin Pool – one of the only places in the world where you can see a living example of the organisms that created the oxygen in our atmosphere nearly three and a half billion years ago.

Where? 150km east of Carnarvon, aprox. 1100km N of Perth.
Why? The Kennedy Ranges are not exactly on the radar as a must-visit site when  cruising around Australia, which is a bit of a shame. They are, certainly, a bit out of the way, involving a fair amount of driving on dirt roads to get to, but they are absolutely worth it. 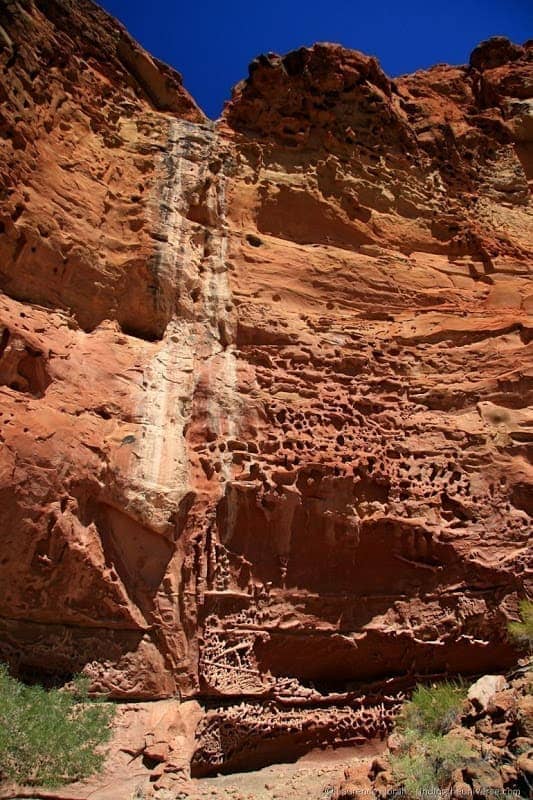 The Kennedy Ranges are a 195km long mesa which rises entirely unexpectedly out of the surrounding flat land as a cliff face which, at points, is over a hundred metres high. On top of the mesa are 15,000 year old red sand dunes, which sit atop this remnant of an ancient land surface. Numerous gorges lead into the mesa, with stunning rock formations rising to either side as you explore and scramble along the loosely defined paths. The most impressive of these are at the Honeycomb Gorge, where the rock has eroded away to form surreal shapes, as if some giant beehive was once in existence here.

Trails lead to the top of the mesa, as well as down a number of the gorges. The views from the top across the outback wilderness are stunning, and well worth the climb. Sitting at the base with a cold beer as the sun sets is an unforgettable experience. Basic camping facilities are available at the foot of the mesa, to fully appreciate the place I’d recommend staying at least a night, if not more.

If you are in the area you could also visit Mount Augustus, the worlds largest monolith (twice the size of Australia’s somewhat more famous monolith, Uluru), which is about another 300km drive inland.

So. Another four tremendous spots in Western Australia, and I still haven’t covered it all. If you liked this, you will probably enjoy reading about the previous four spots I highlighted, or the article about art on a salt lake, far away from anywhere.