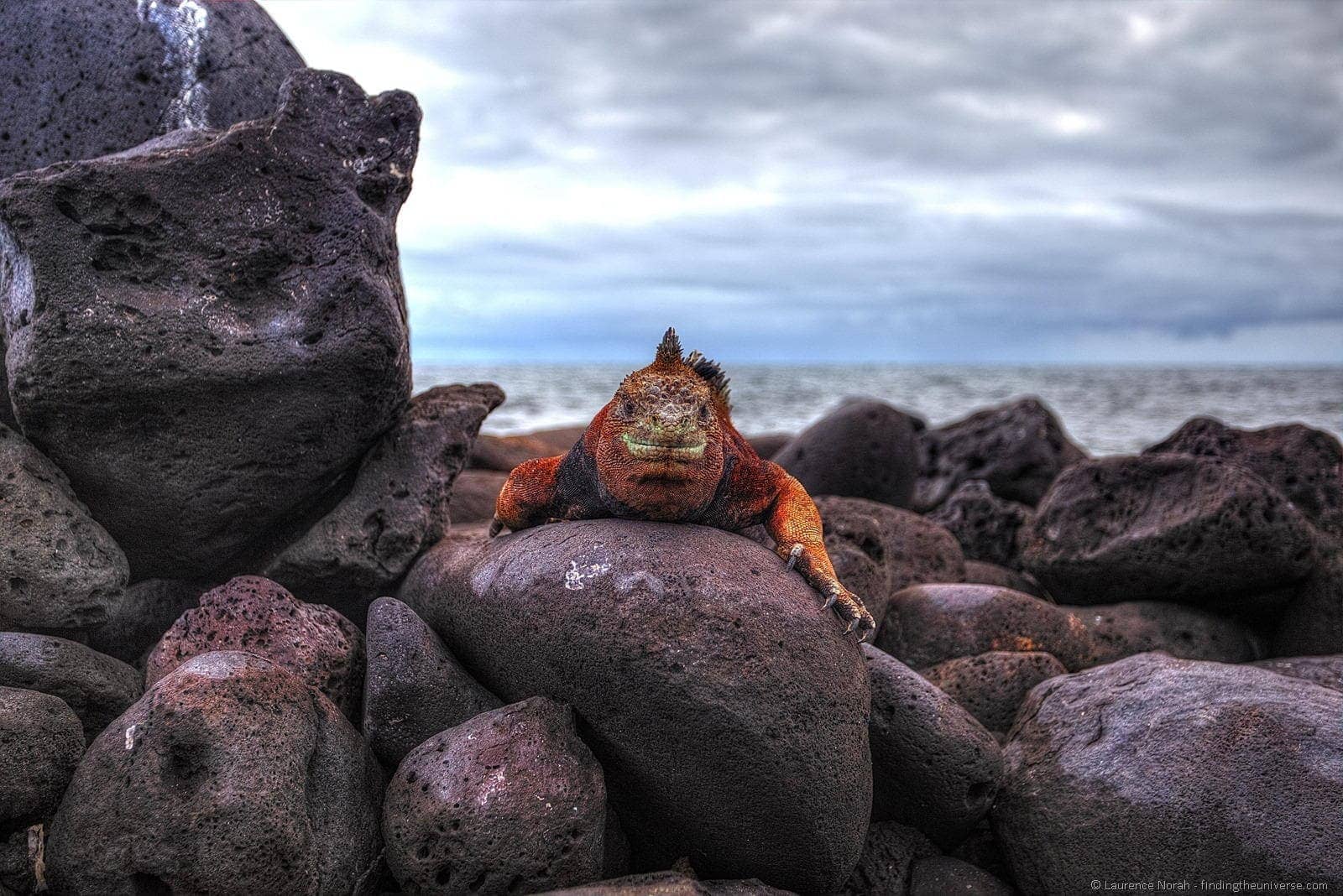 Home » Destinations » South America » ecuador » Hiking, biking, cycling and more! An adventure tour of the Galapagos
Finding the Universe contains affiliate links, meaning if you make a purchase through these links, we may earn a commission at no extra cost to you.

The Galapagos! Yes, I think I will start every post about the Galapagos like that. They are just such an awesome place to visit! Which was something we recently had the very distinctive pleasure of doing, on a 10 day adventure tour with GalaKiwi.

The thing is, when you tell most people that you are heading to the Galapagos, they’ll assume you’re taking some kind of cruise. Because to be fair, taking a cruise is what most people do to get around and see the sights.

But it turns out, you don’t have to take a cruise. You can do an entirely land based tour, sleeping in actual hotels that don’t go up and down, and doing a combination of land and sea based activities. Which was what we did. Oh, and we saw lots of sea lions being cute. Hopefully it’s ok if I keep throwing photos of them at you. 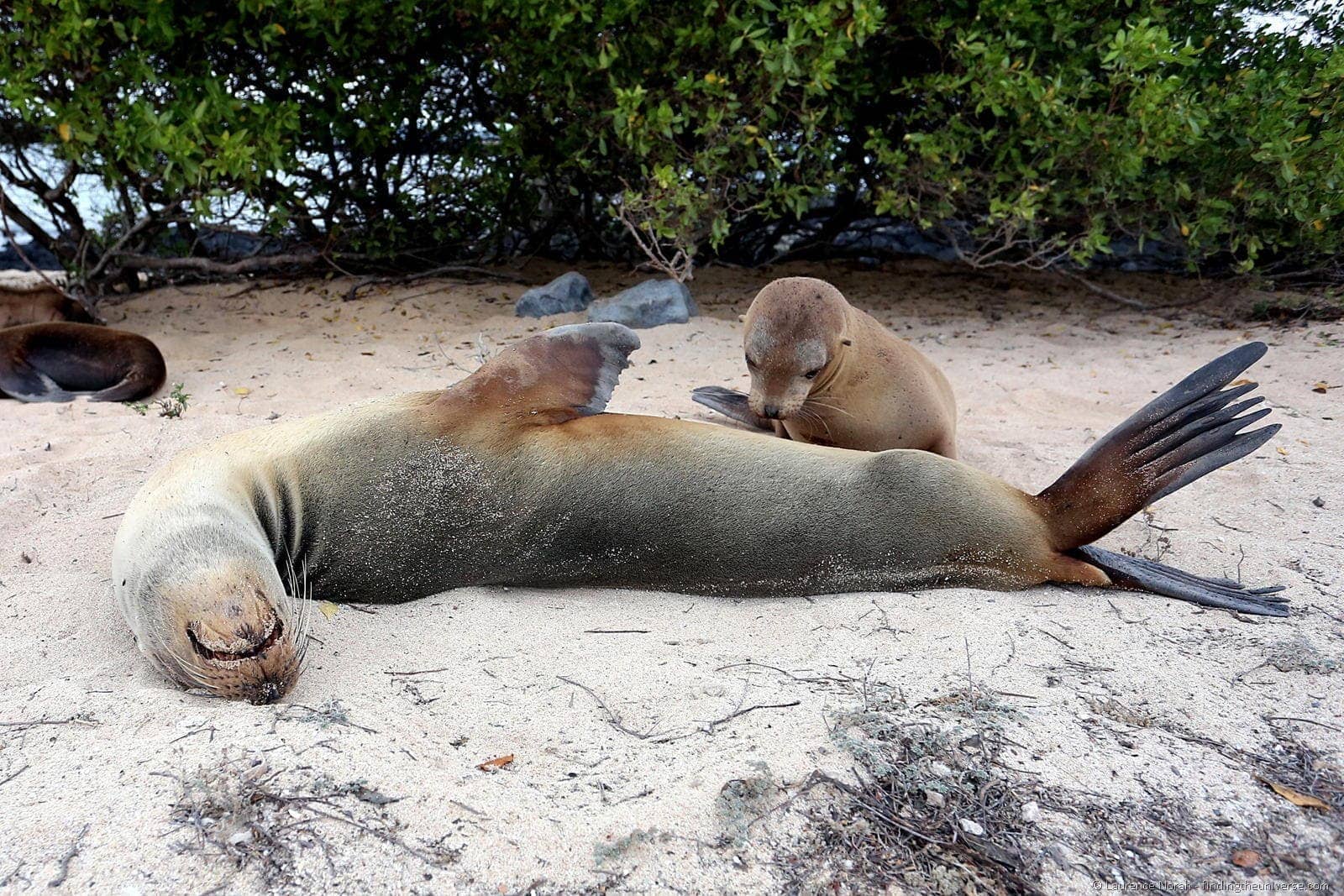 When someone says “adventure tour”, you expect it to have some adventure. And our GalaKiwi tour did not disappoint. We hiked, biked, kayaked, snorkelled and generally adventured our way from one side of the islands to the other. Here’s what that looked like:

Cycling on the Galapagos

Cycling is actually a fairly popular way to get around the islands, with bikes available for hire on three out of the four inhabited isles. We cycled exclusively on San Cristobal, where there are some great opportunities to get out and explore.

Our GalaKiwi trip saw us take a truck up to the top of the island, around 10km inland, to the cooler highlands, and then cycle back down. Because to be honest, downhill cycling is the best kind of cycling.

The road was part paved and part dirt, which made for a lot of fun as we zoomed down the hill. On the way we stopped off for naturalist talks to learn about the flora and fauna we were passing, admired the gorgeous scenery opening up around us, and finished up at the lovely La Loberia beach where we met sea lions and marine iguanas.

Not a terrible way to end a cycle ride, I think you’ll agree. We even managed to avoid falling off.

Hiking! In serious heat! Up volcanoes? Sounds like a recipe for disaster, right?

Well, the good news is that up in the highlands of the Galapagos, it’s actually often quite cool, particularly if there’s a little bit of cloud. So it can be a very pleasant experience. 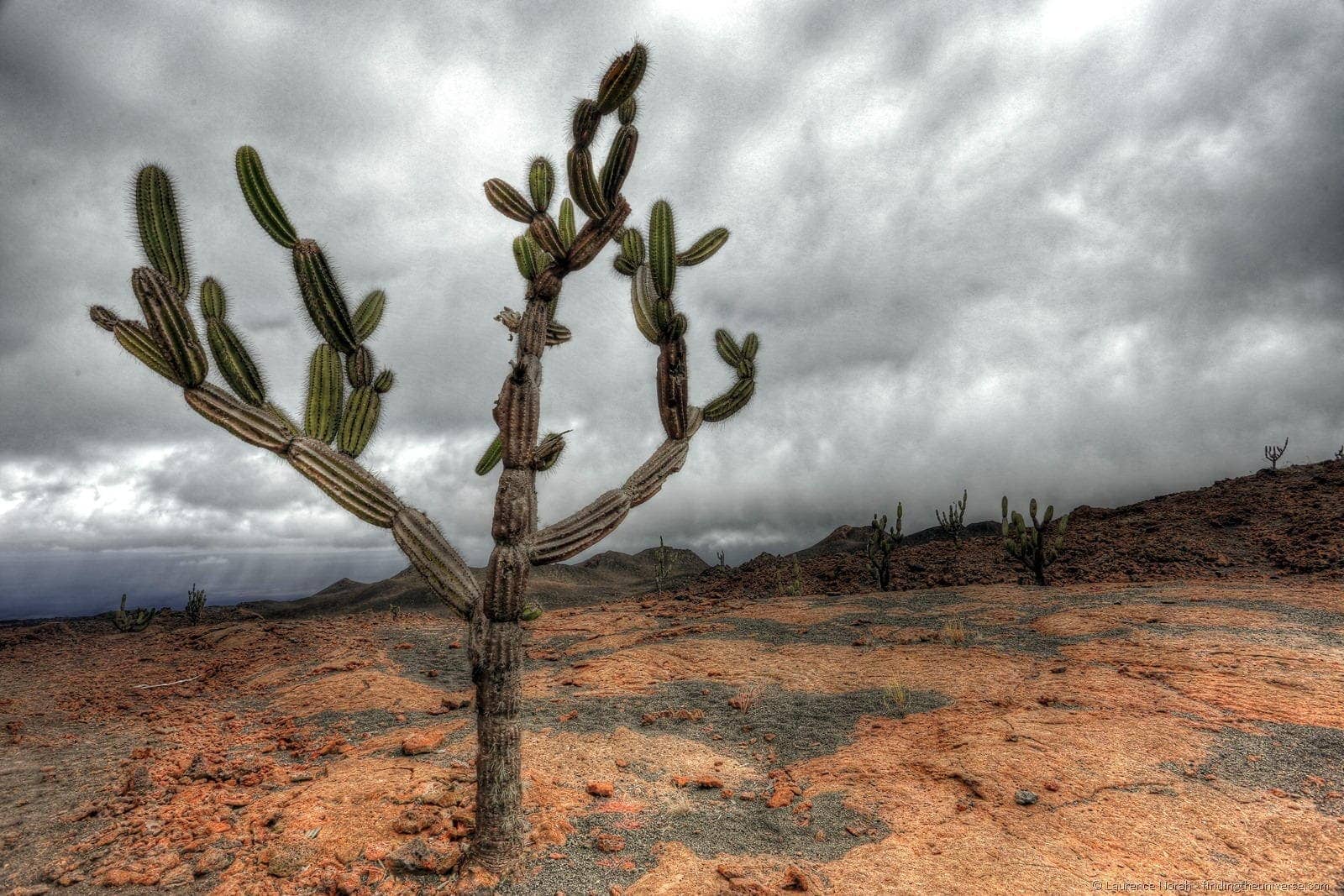 As our hike turned out to be. We were hiking up the Sierra Negra volcano, one of the largest volcano calderas in the world, on a day hike of around 20km total distance.

Now, that might sound like a lot of hard work, but fear not. Much like the cycling, the hiking also started with a drive – almost to the top of the volcano in fact. So we just had to ascend the final 300 metres of height through lush vegetation, and then the rest of the walk was largely around the quite magnificent rim.

At 10km in diameter, this would have been view enough, but our adventures took us off the other side of the rim and onto an other-worldly lava landscape that looked, as so many writers have no doubt said about this sort of landscape before me, just like the surface of the moon. With cacti. A cacti filled moonscape in fact. Science fiction heaven. 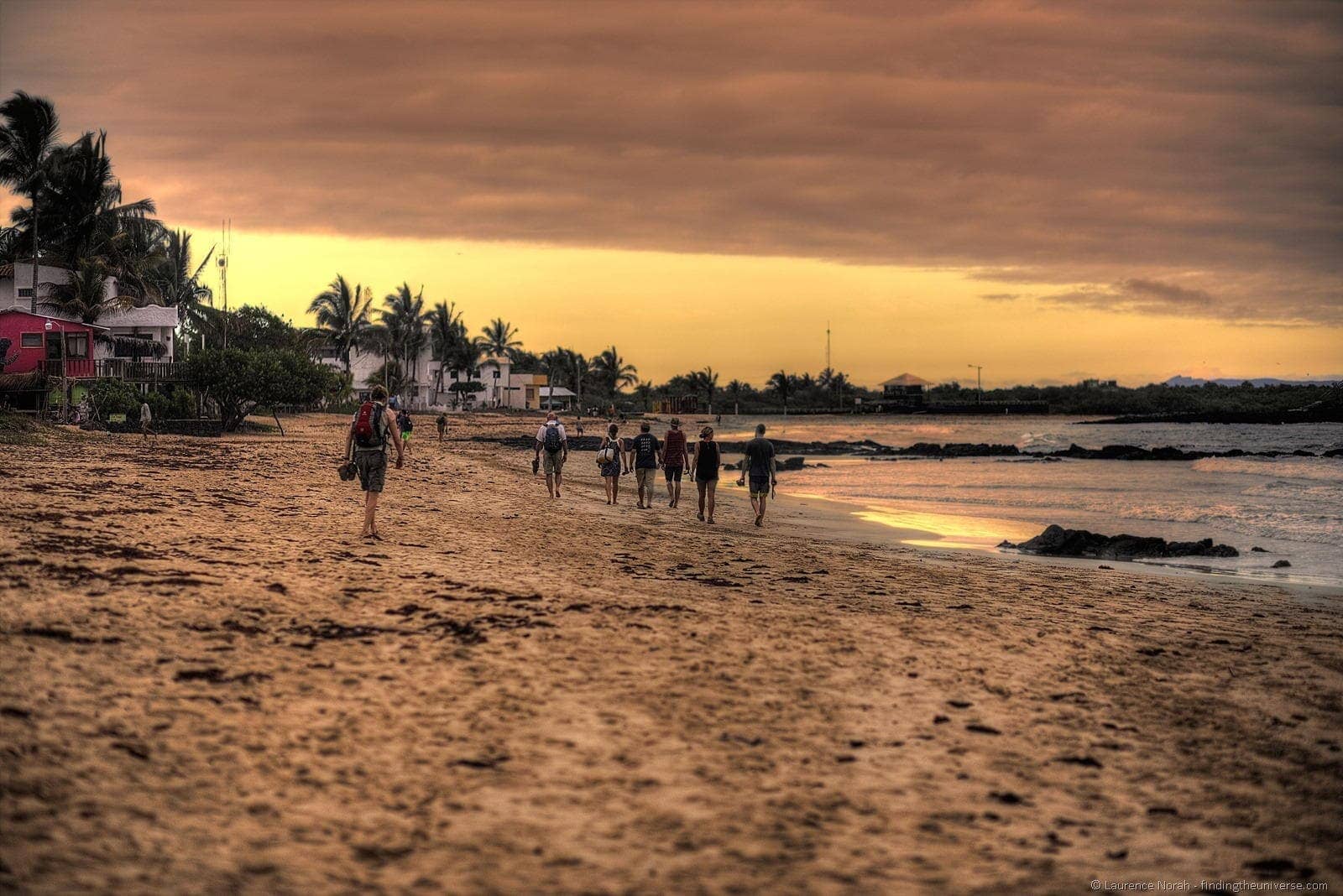 It’s probably about time I told you about something we did in the water, given that the Galapagos are home to one of the most spectacular marine environments on earth. 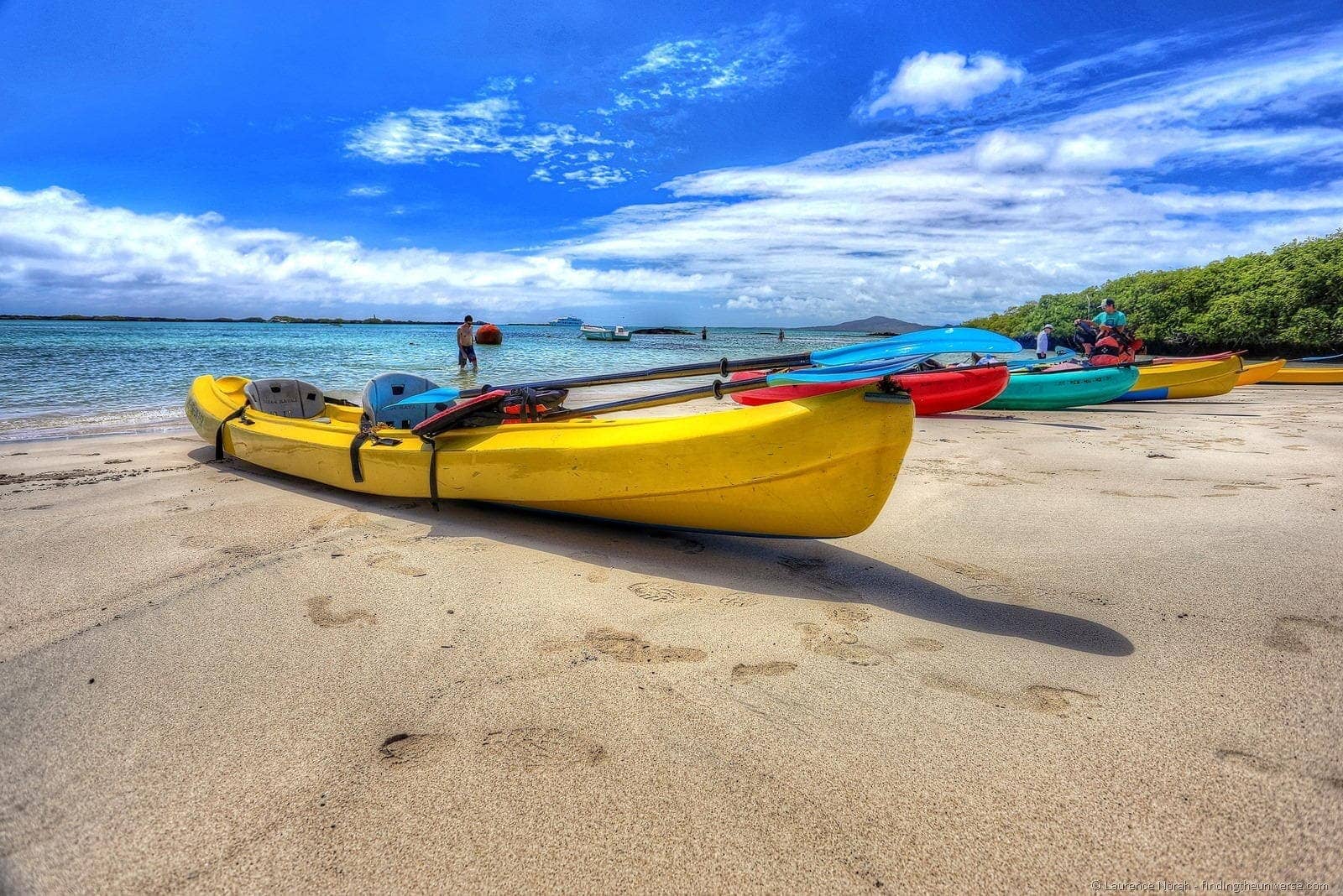 Our kayaking experience was on Isabela island, home to gorgeously turquoise waters, sea lions, and the Galapagos Penguin, which was the real highlight. This is the only penguin to be found on the northern hemisphere, and Isabela island is the best place to see it.

We geared up on the white sandy beach and took off, two of us to a kayak. If there’s one thing that kayaking is *really* good at, it’s testing your communication and co-ordination skills with your chosen partner. I’d like to say that Vera and I passed with flying colours, but I think the reality was a little way from that. Still, no-one got hit with a paddle, and that was the main thing.

We did get up close and personal with blue-footed boobies, sea lions and penguins during our hour long kayak though, so mission accomplished on that front! 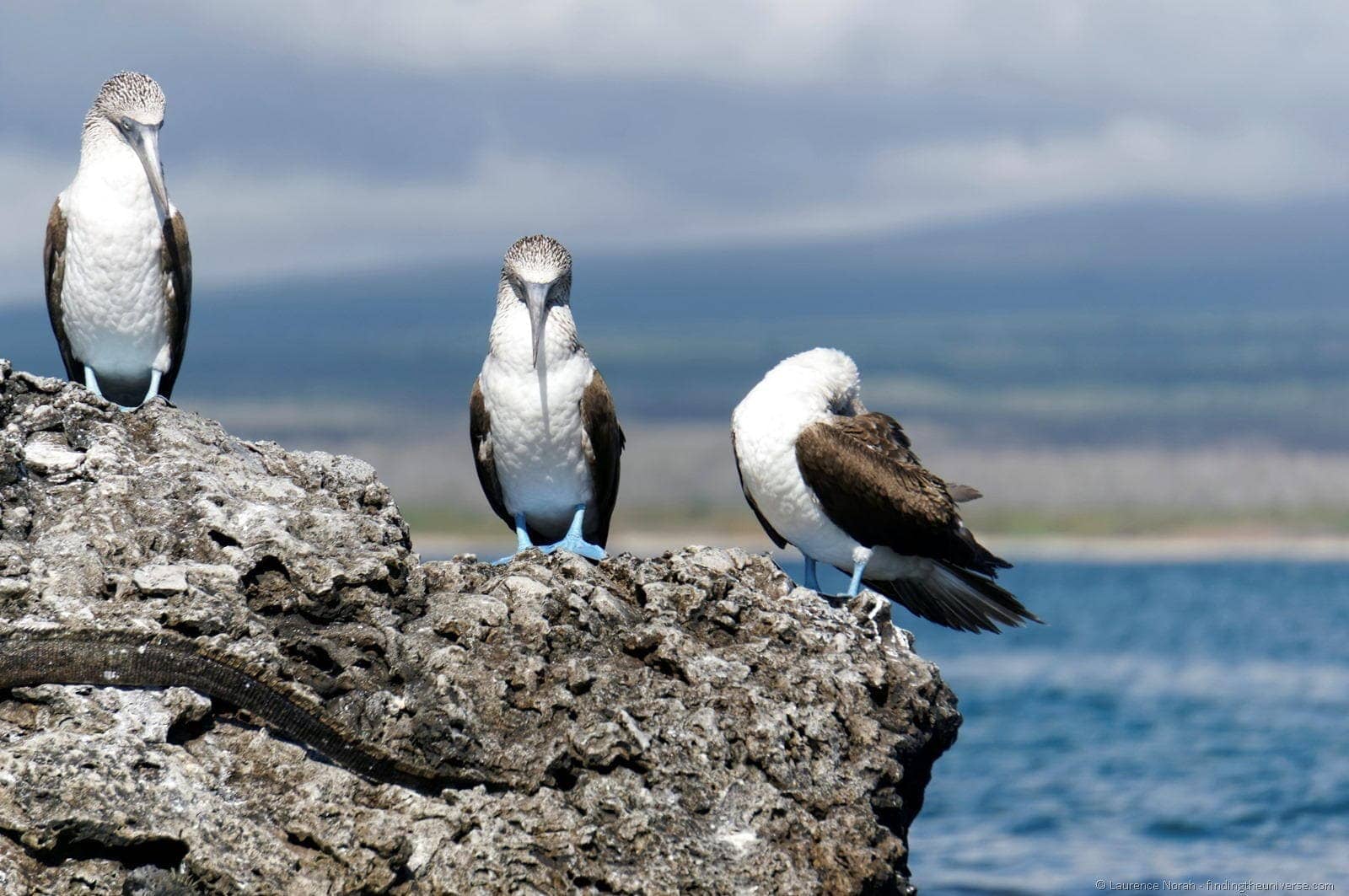 We snorkelled on multiple occasions in the Galapagos, but without a doubt the best snorkelling of our trip was the few hours we spent at Kicker Rock, a few kilometres off the shore of San Cristobal island.

It started as we arrived near the rock, and the boat’s captain spotted a three-meter-wide manta ray just off the bow. Usual courtesy and decorum went out the window, and there was a mad scramble for snorkelling equipment as people threw themselves into the water. The first thing I saw when entering the water was the ray just gently floating past me, a couple of metres from my nose. 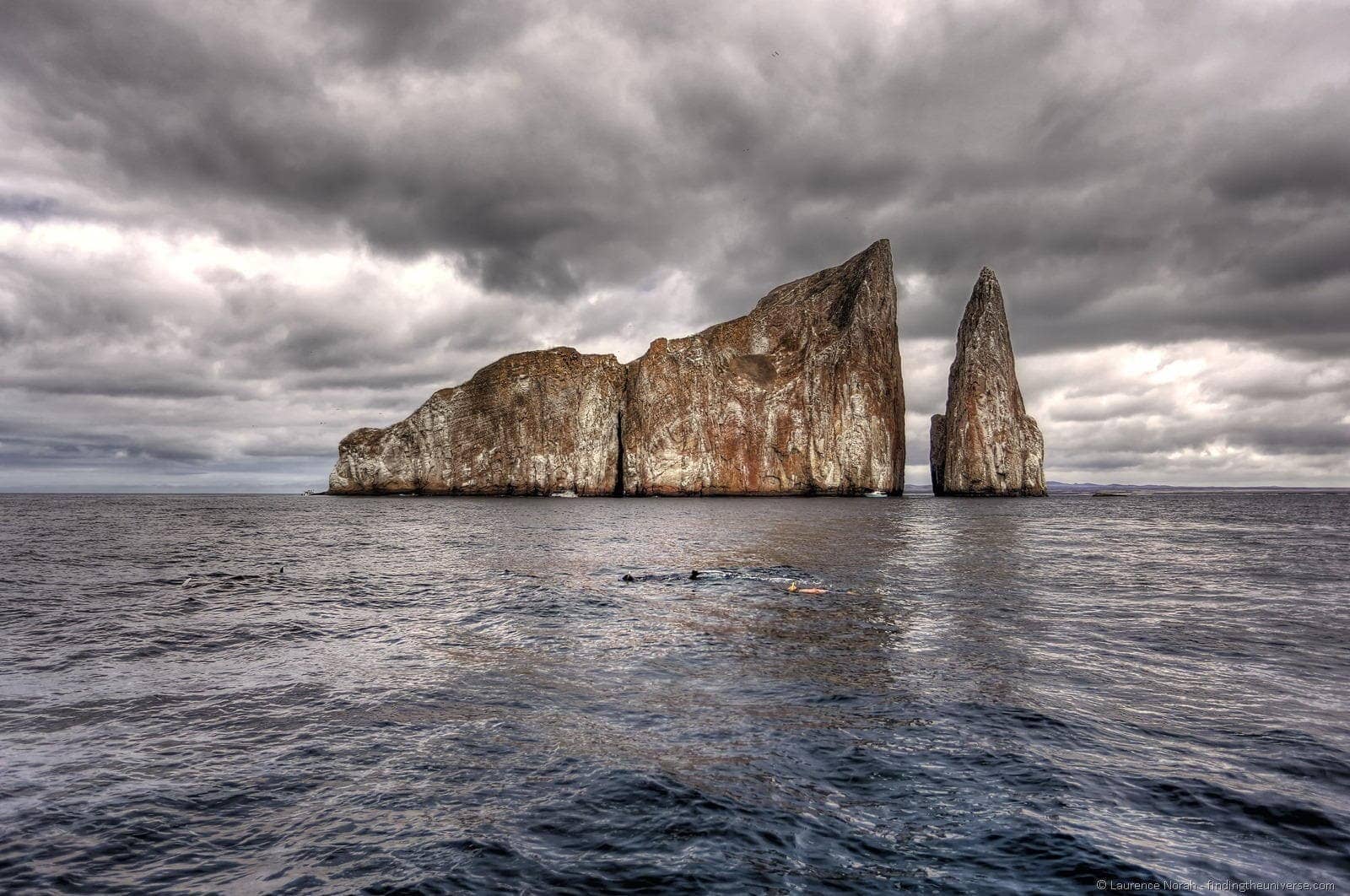 From that point on, unbelievably, the experience got better. Seconds after the ray left, a pod of dolphins turned up to greet us. Then, as we snorkelled around the actual rock, we saw turtles, sea lions, black tip reef sharks, eagle rays, and a whole lot more. So much fun was had in fact, that we were all pretty exhausted when we got back in the boat and peeled off our wetsuits.

Except that wasn’t the end. Just as we’d all sat down, the last person out of the water shouted that a swarm of hammerhead sharks had turned up. Dispending with the wet suits, we all threw ourselves back in the water again, to experience the truly magnificent sight of hundreds of these oddly shaped sharks coming up from the depths to say hello. Quite the day of snorkelling indeed.

Whew! That was a lot of activity for one post. Worth mentioning in summary was that everything was optional. If you found the cycling to be a bit tough, you could ride down in the truck. If hiking a volcano doesn’t sound like your kind of gig, you could hit up the beach instead.

The activities were well matched with breaks for sharing information and snack times, so that no one ever felt exhausted, and at the end of the day we had all seen and done so much that we had a really good sense of achievement. And yes – we really had earned those beers by the end of the day…

If you liked this post, check our our series of posts from the Galapagos, which include more gorgeous photos and a planning guide to help you ensure you are ready for your own trip to the Galapagos.

Our Galapagos experience was in partnership with GalaKiwi, who run an awesome tour. All opinions remain our own.