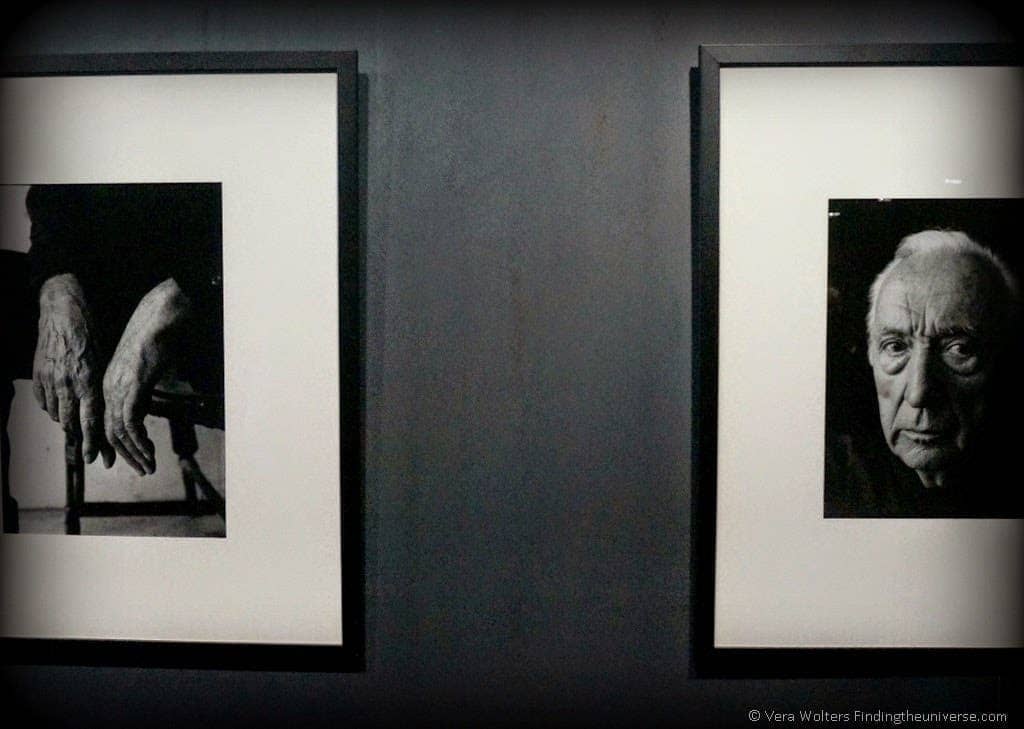 Home » Destinations » Europe » France » Pierre Soulages: The Painter of Black
Finding the Universe contains affiliate links, meaning if you make a purchase through these links, we may earn a commission at no extra cost to you.

The Aveyron region in France is dense with villages holding the title of the “Most beautiful towns in France”, but the reason I decided to go on a trip there was that the itinerary foresaw a visit to the contemporary art museum of Pierre Soulages in Rodez.

If you are like “Who? What? Where?” now – so was I. Ye olde Internet was fired up to provide some background information, which let me know that Pierre Soulages is a (super famous) painter who likes the colour… black. Which is really the absence of colour.

So far, so interesting. But then it turned out that this was not some artsy way of saying he uses black a lot; no: it actually meant he paints black pictures. And because I could not quite imagine what that might look like and how someone can get through with painting pictures entirely black and be that recognized, I went on the trip.

That and the itinerary also included a lunch in the Café Bras next to the museum, which is owned by Michel Bras who happens to hold three Michelin stars. How would I miss that, right? After all, cooking is an art, too! 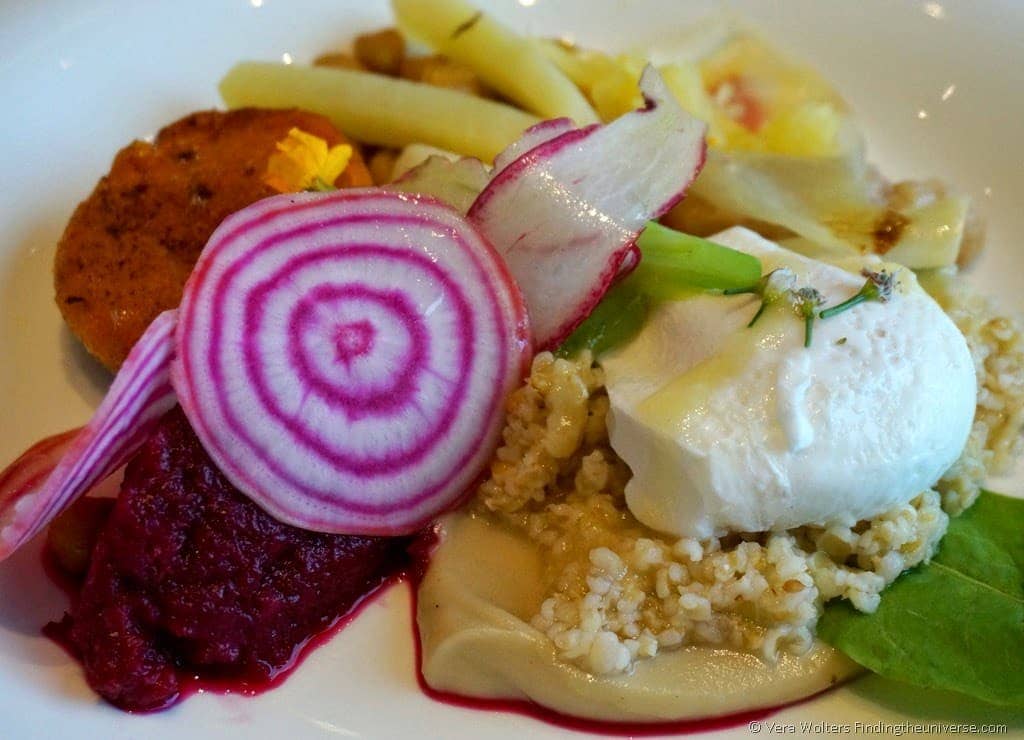 The museum is, like I mentioned before, in Rodez, the county town of Aveyron, which is where Pierre Soulages was born on Christmas Eve 1919. In Rodez, that is, not in the museum. Because the museum only opened this year, in spring.

It is a bit of an unusual addition to this small town whose other main sights consists of historical buildings and matters: these black steel cubes covered by rusty-coloured Corten steel, whose earthy colours resonate with the artist’s work. 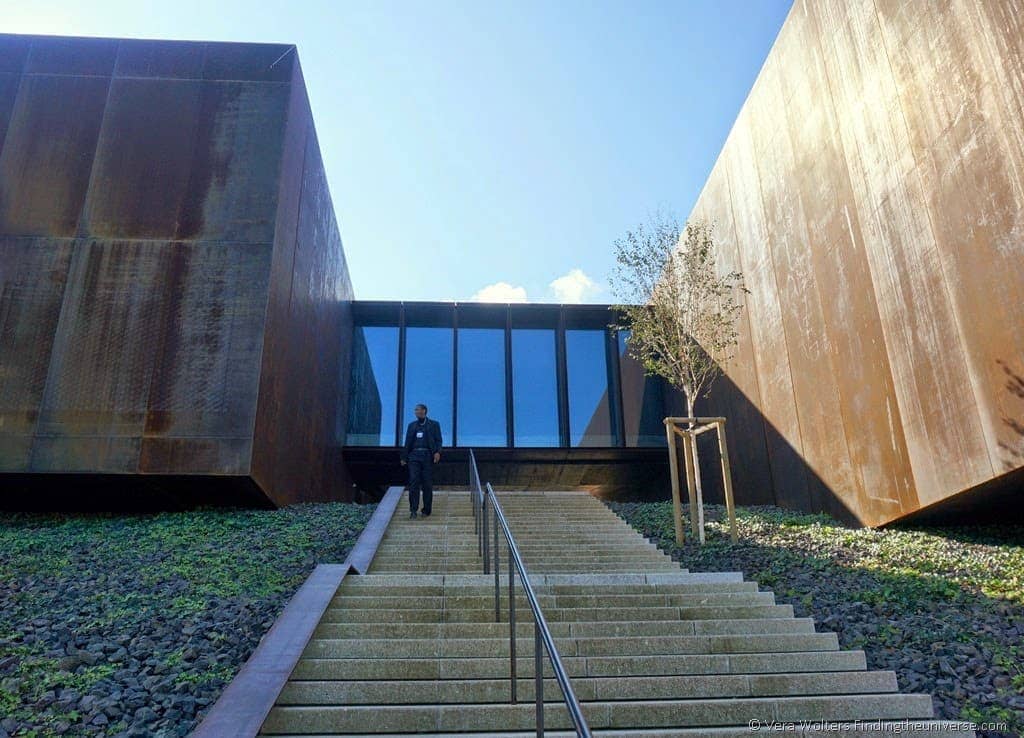 And even though Rodez seems an unlikely spot for such a museum, it was his home town Pierre Soulages chose to donate the majority of his works to. In 2005 he and his wife Colette gifted Rodez with around 500 works and documents, estimated to be worth around 35 million Euros. It is probably the most generous donation a living artist has ever made. 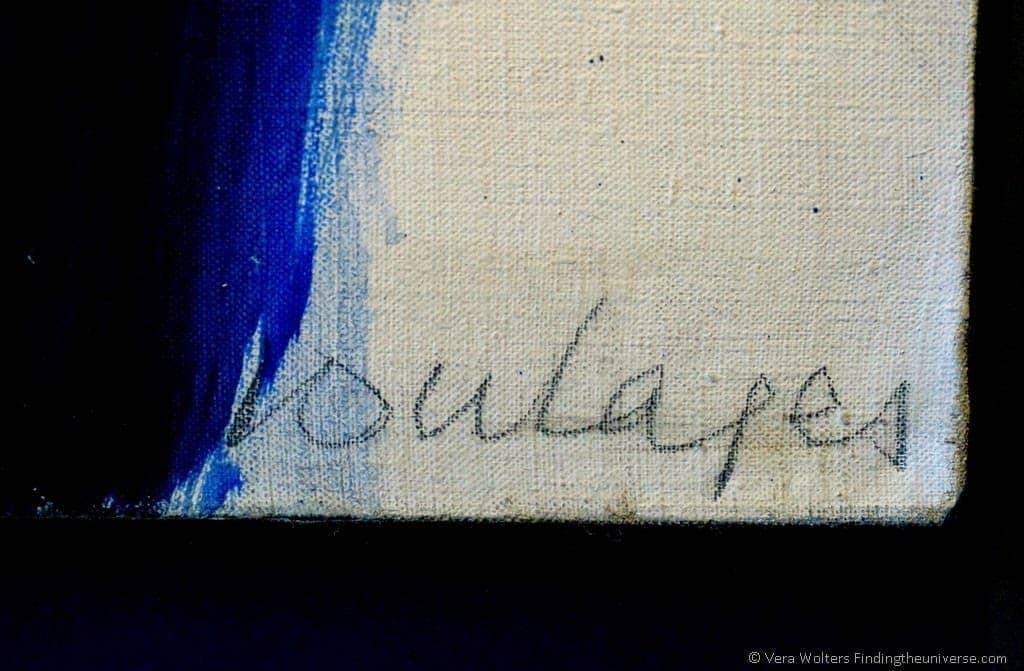 But then, Pierre Soulages doesn’t strike me as a man who orientates himself on how things are normally done. He doesn’t have a full formal education as a painter, yet he is France’s greatest living and most successful painter. He was also the first contemporary and still living artist to be exhibited in The Hermitage in St. Petersburg, Russia.

If abstract art isn’t your thing at all, this might still not impress you. There are no references to our reality in his works – even the pictures’ titles consist of numbers, letters, dates, not words. Funnily enough, this was a detail that bothered me: not having a hint with what to go by. But it also means that your own impression of the picture is not watered down.

And the paintings are powerful – if you manage to open yourself up to them, you will connect on a level that is beyond logic. Your brain will tell you that you are looking at something completely random, but your heart will disagree and make a sense, will see a meaning, recognize a message. 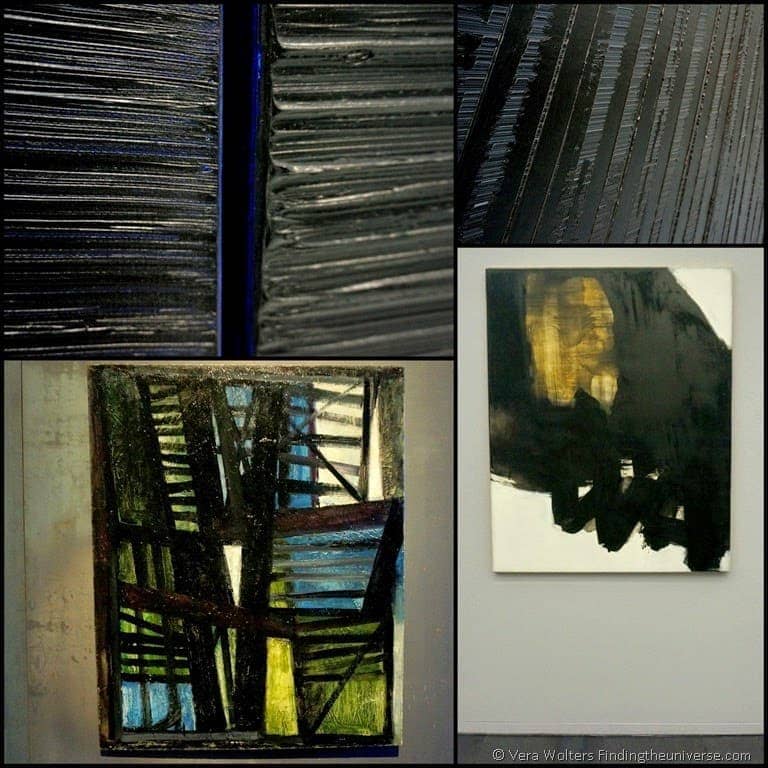 I mean, it’s still a museum, but even if I’m going to sound slightly nuts now, I think it can be somewhat of a spiritual experience. In fact, looking at the black pictures especially felt quite meditative.

But that’s me, and I don’t know what you would see, what you would feel. I’d say that’s the beauty of it: you could have a completely different experience than I did.

Soulages himself will certainly not point you anywhere. He doesn’t want to represent anything; he never belonged to a movement. I think this why his art has a kind of timeless quality – you could not tell which years it was from because it doesn’t resemble anything else, really. When he paints (and he still does, at age 94 which does not mean anything to him), he doesn’t know what he will end up with – which he describes as the difference between craft and art. He does have a vision, but if it doesn’t come together, he’ll burn the picture. 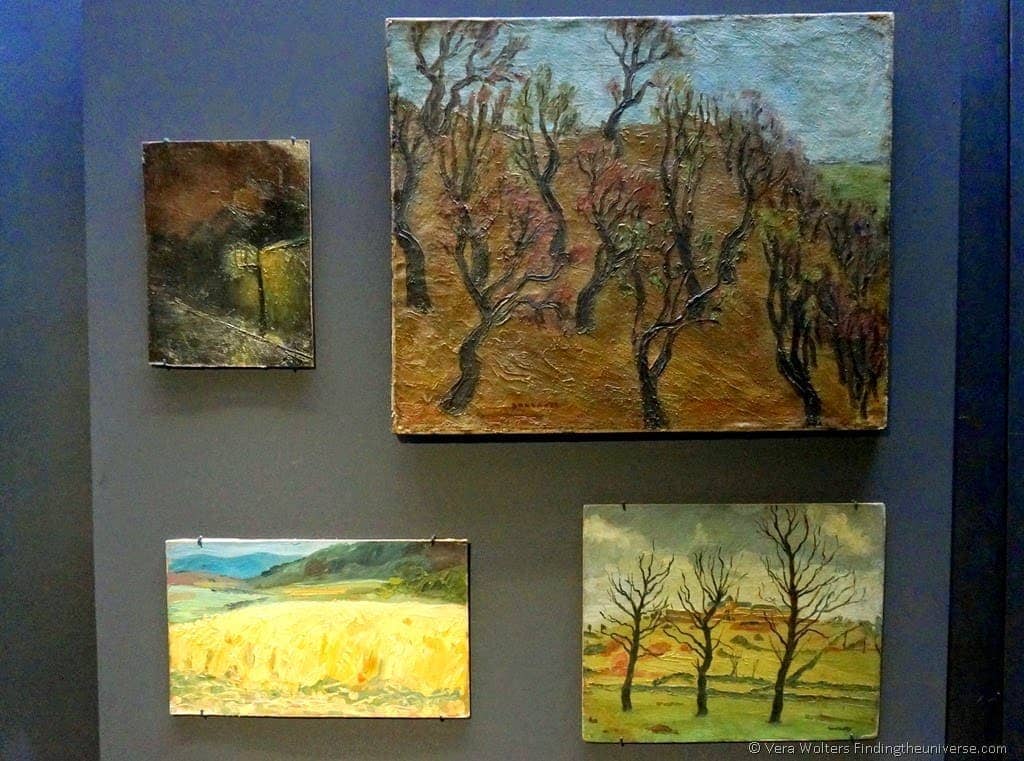 And while his art is not the traditional kind, he uses materials that are very grounded; like brushes and scrapers that are used for building, and mostly dark, earthy, natural colours, like walnut stain. 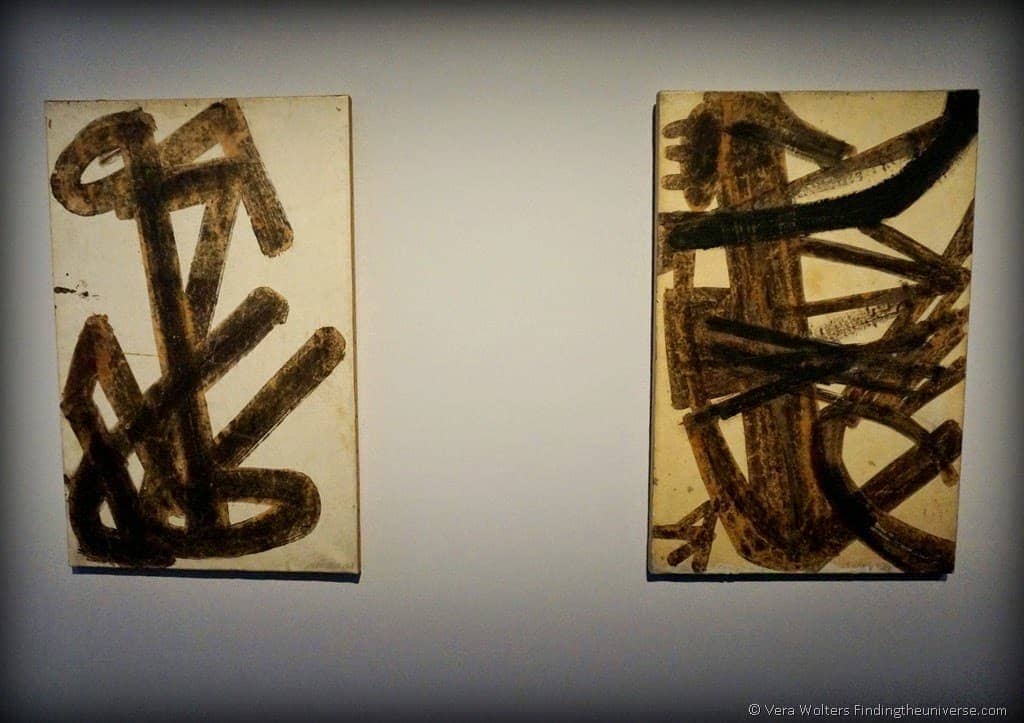 The museum also dedicates a room to another important project he undertook: designing the 104 glass windows for the not far away Abbey of Conques, a UNESCO World Heritage Site and popular destination for pilgrims.

This took him 7 years, including research, and since the Conques Abbey is a bit of a must-see in Aveyron, it’s very interesting to get an idea of the amount of work and thought that has gone into this project. He basically spent four years just baking glass in order to develop the textures that would do the trick. The windows, which are all made of plain uncoloured glass after all, change colour depending on how much light falls through them.

One can imagine that a man who paints entirely black pictures, only using the structure of the paint as a means to reflect light for it to create a work of art, would be well suited for a job like this. 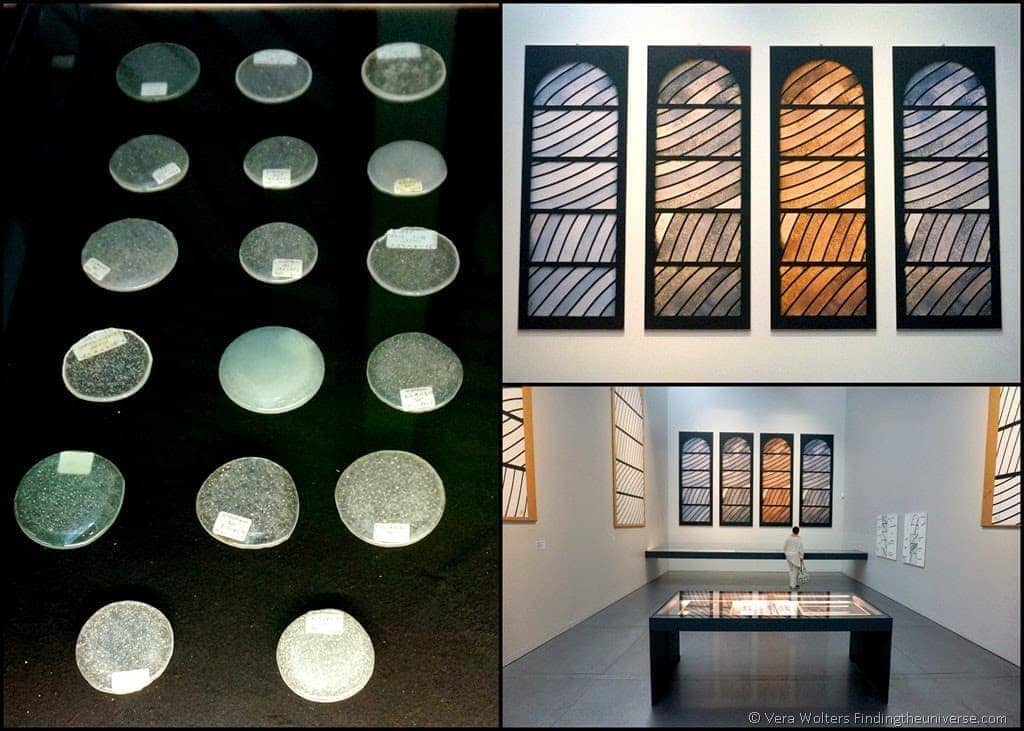 I hope to have given you a bit of an impression of the museum, which will also feature other artists and changing exhibitions, as it was wished by Pierre Soulages, who is – who would have guessed – somewhat opposed to it becoming a static affair. All in all, well worth your time, unless you’re really, really sure you do not like abstract art.

Even then you might feel a tad of sympathy for Pierre Soulages, because it was him who insisted that the menu of the Café Bras, which is part of the museum, needed to be affordable for art students. This means you can get a menu from a 3-Michelin-starred chef from 15-30 Euros. You can imagine though, that booking in advance is kind of crucial – I’m talking about at least two weeks in advance. 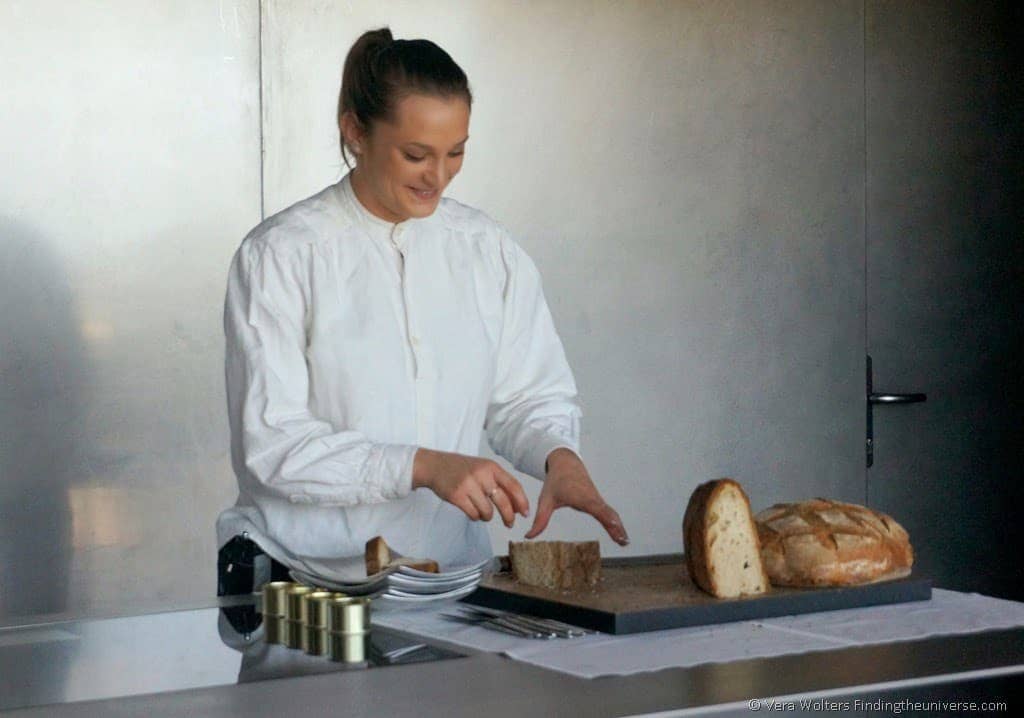 Another tip when it comes to visiting the museum: if you buy your ticket online, you will get a very good deal: two museums for the price of one (Musée Fenaille and Musée Soulages), plus the tickets are valid for a while. Or go to the Musée Fenaille first, get the Combo-ticket there, and save yourself the queuing at the Soulages museum.

If you would like to learn a bit more about “the painter of black and light”, his background and motives, these articles might be a good and interesting starting point: “Pierre Soulages and his all-black canvases” and “Pierre Soulages, Painter of Black and Light”.

Maybe it’ll inspire you to slather your own favourite colour over a canvas! World fame could be just around the corner…

Thank you for reading and thanks to the Aveyron Region for inviting and hosting us – it is a ridiculously picturesque part of the world, and everyone we met was most accommodating! A special shout out to Camille, who was our guide/driver/everything and very knowledgeable, very patient, and very kind.

I got to Rodez by train, and if you want to do the same, head over to SNCF, the French Railway, where return fares from London start at around 140 GBP. Tip: always check the prices for first class; sometimes the difference to standard is so small that you can upgrade without spending much!