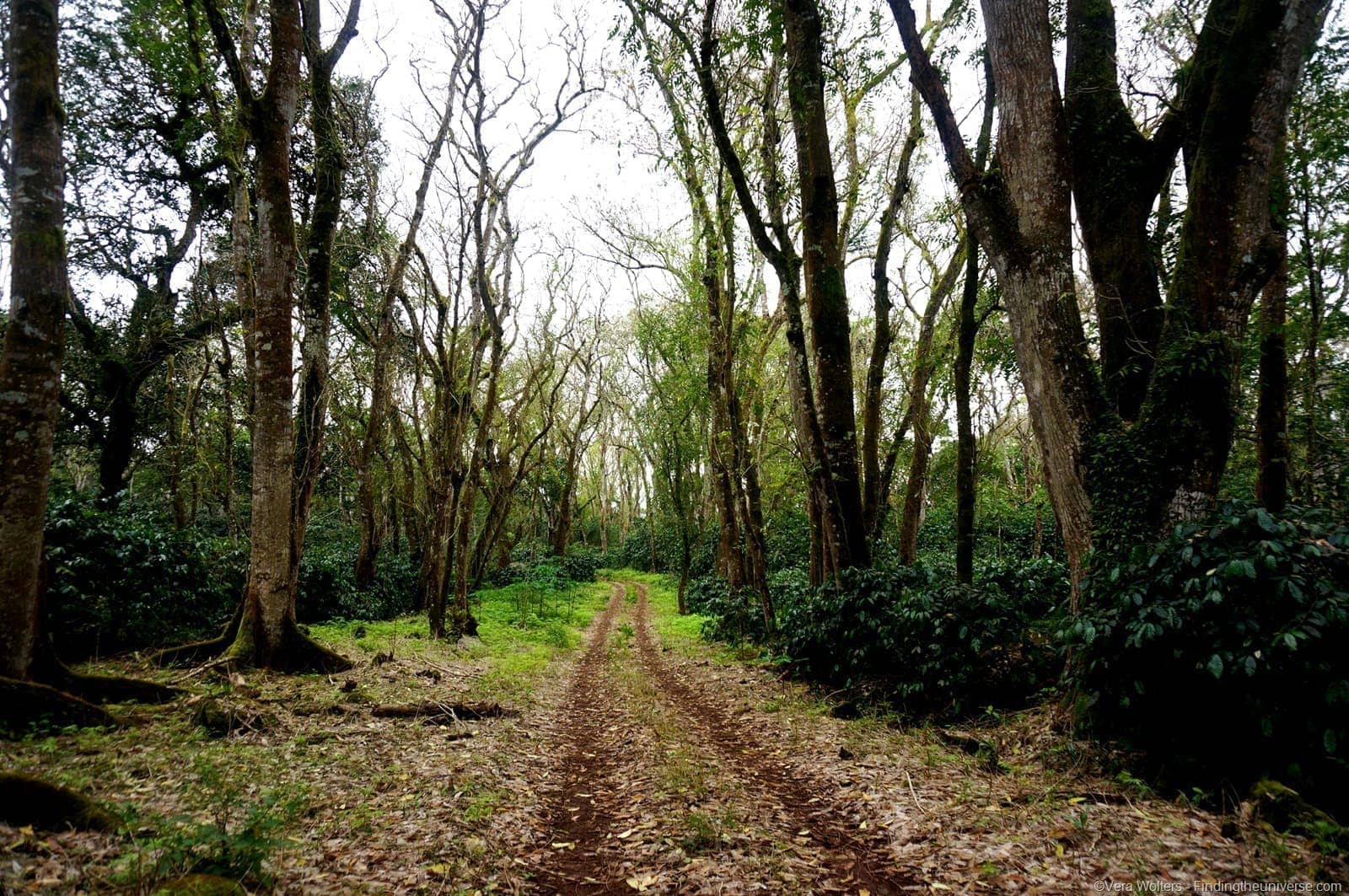 Home » Destinations » South America » ecuador » The Galapagos: Boobies and… Coffee?!
Finding the Universe contains affiliate links, meaning if you make a purchase through these links, we may earn a commission at no extra cost to you.

I’m not saying you’ll have a hard time finding souvenirs to bring home from your trip to the Galapagos, what with the shops on the bigger inhabited islands. But maybe you suspect T-shirts saying “I love Boobies” (referring to the famous bird you can spot here, the blue or red footed booby, of course) are hilarious in the Galapagos, yet not so much once you’re back in your hometown.

Maybe you are the kind who prefers more natural gifts, and who likes to collect some shells as a souvenir, a bit of dried coral, fill a little flask with sand, or press and dry a pretty flower in the book you brought along on your holiday.

Sadly, unless you want to risk being fined and maybe even jailed, attempting to take out organic materials from the Galapagos is not a good idea. But wait, there is an exception: you could bring home coffee!

Yup, that’s right, there are coffee plantations in the Galapagos, and they produce an organic gourmet blend that is for example sold in selected Starbucks stores, for a whopping $8 a cup. And although the Galapagos might not be a budget destination to get to, the same cup of coffee costs you $1,50 locally. The money you’ll save! 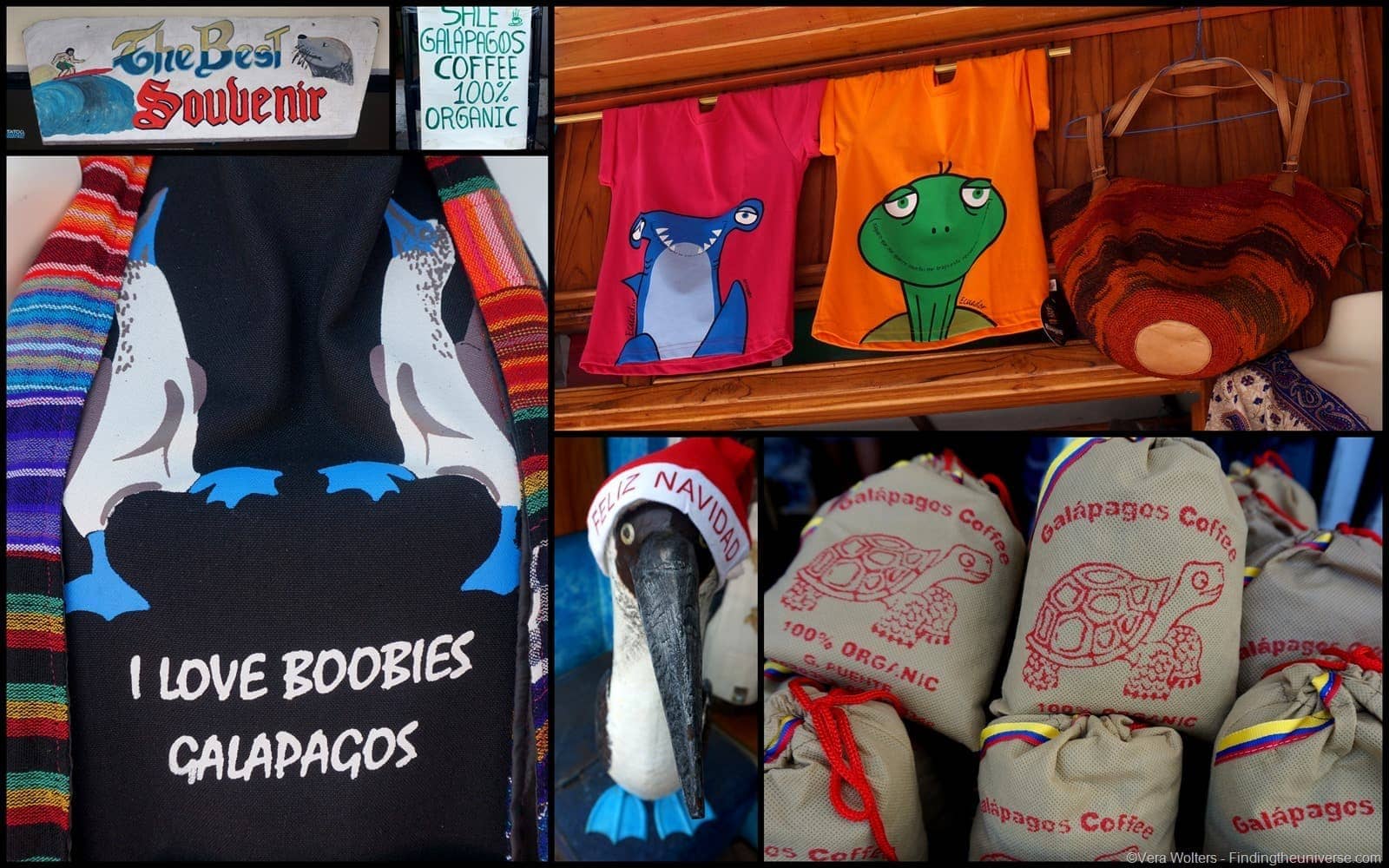 We were actually quite surprised to learn that the Galapagos Islands have an agricultural side. So when we then got the chance to get a little tour through the first and biggest coffee plantation on St. Cristobal island, we gladly took it. Later we found out that the estate is actually an ecological sanctuary and a UNESCO “Patrimony of Humanity” site, as it provides a sustainable resource for the people of the island!

Coffee was introduced to the Galapagos in 1886, with the first coffee plantation being established on the island of St. Cristobal. Two generations later, the “Hacienda ‘El Cafetal’” is still going strong. The man who manages the plantation for the owners, and who has been employed on it for about 20 years, is called Nicholas. He was also the one who showed us around the plantation, claiming to not speak English very well, and defying that by answering each of our questions extensively.

I really wanted to see what a plantation looks like that grows coffee organically, and it was pretty cool, because it did not look like a plantation at all. In fact, it felt more like walking through a regular forest, with different kinds of trees and bushes, flowers, mushrooms, wildlife… Admittedly that also included some “carmelitos”, little black flies, which were only too delighted to see us; a feeling that was not necessarily mutual.

Nicholas explained that the property is 500 hectares big, of which 300 hectares are used to grow coffee trees. Per 8 hectares there are around 1000 coffee trees, which are between 50 and 150 years old. The type they grow is Arabica, and the Arabica trees can grow up to 4-5 metres. The company tries different approaches for the cultivation: normally the trees get cut every 30 years, but some they let grow, and others are burnt down so they will regrow.

In terms of the organic side they use the “under shade” system where the coffee trees grow under big trees that are up to 25 metres high. All the pests that occur in this chemical-free environment have to compete with each other and keep themselves balanced, like nature intended it. Compared to non-organic methods, it’s an easier system that requires much less work, with the only disadvantage that the productivity is also less.

In fact, twenty people suffice to deal with everything on the property. This changes only during harvest time, when 100 to 150 people come to hand-pick all the ripe coffee-berries. During a good harvest, they can manage to end up with 200 tons of dried coffee beans. A thing to keep in mind here is that it takes the weight of five dried beans to equal the weight of one fresh bean. And if you want to figure it all out now mathematically (because I am most certainly not going to), here’s an extra fun fact: 52 beans are needed to make a cup of coffee. 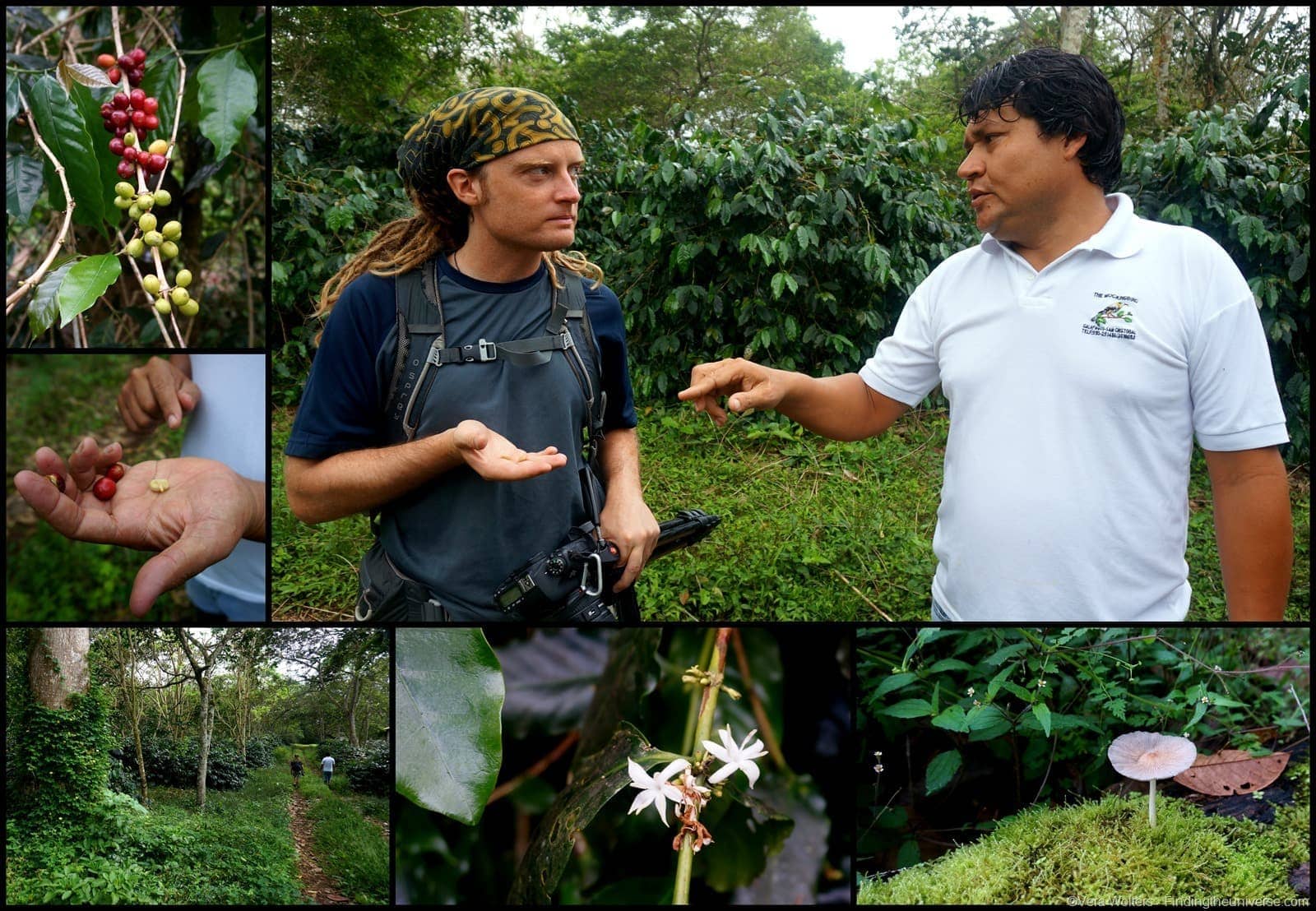 After the picking, the berries have to endure some quality tests: they are put in a basin with water, where the floating ones are taken out, then they are sorted out further by hand on big tables. Here another 3-4 % don’t make it, either because they are too green or too ripe or too big (latter are seriously called “monster beans”!). Another run through a machine follows, during which beans that are too hard or not hard enough get sorted out. A last floating test concludes the procedure.

Finally the berries are washed and the fruit is removed from the beans (which are really seeds, and only got their misleading name due to their resemblance to beans), after which the beans are laid out to dry. By the way, the berries are quite tasty: on our walk through the plantation we ate a few – strictly for quality control, of course.

For the roasting the green beans are shipped to Guayaquil on the mainland. It’s quite a detour because the roasted beans then get transported back to the Galapagos so they can be sold to tourists, but the roasting is simply too big of an operation with too much machinery needed to be done locally. The only exception: Nicholas owns the “Mockingbird café” near the pier in St. Cristobal, and the coffee he sells there has been roasted right at the premises. 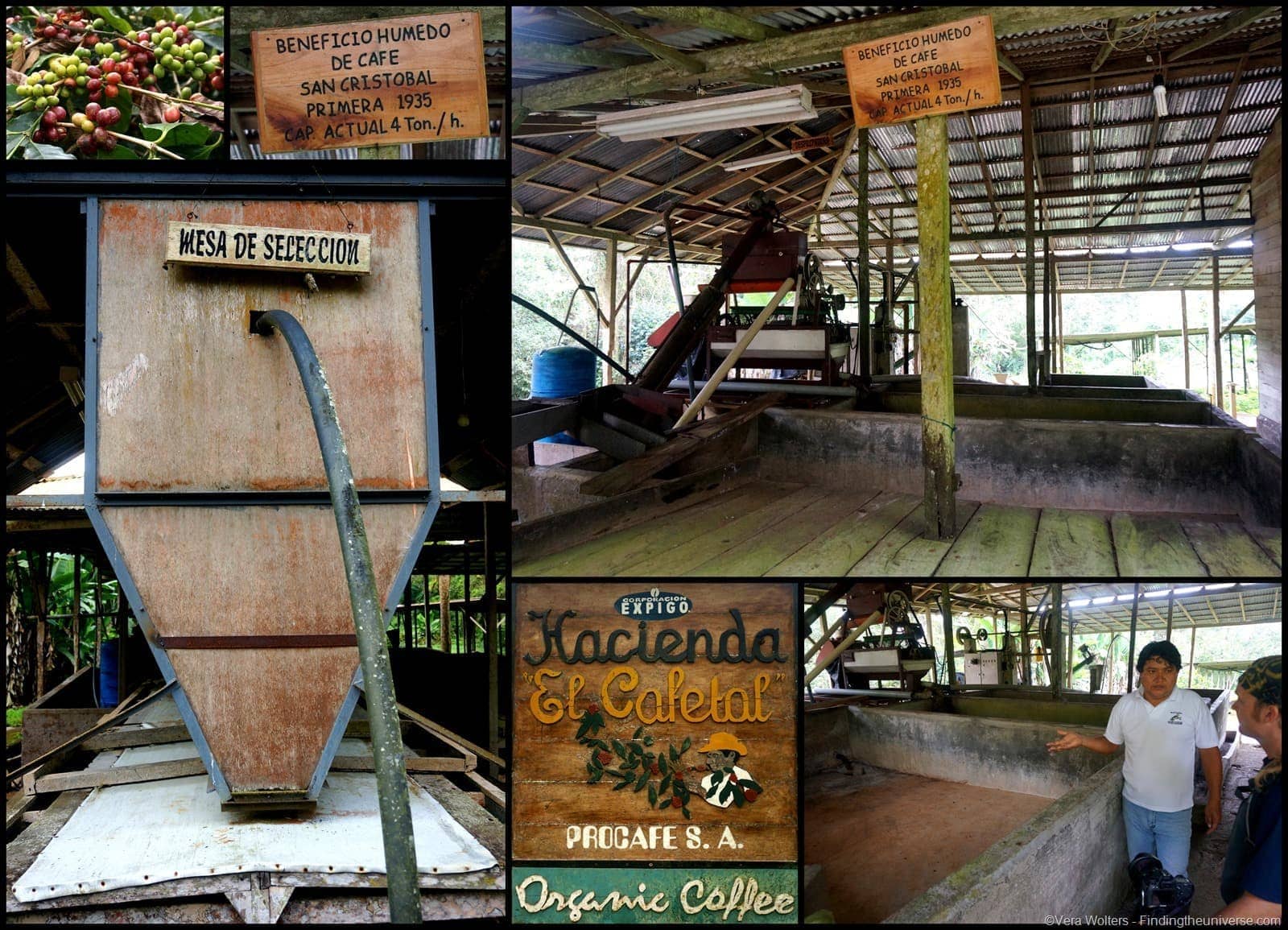 So what makes Galapagos coffee so special? A sack of coffee that weighs 47 kg is normally worth 150$, yet the Galapagos coffee gets sold for 600$ per sack – not exactly an irrelevant difference! I guess it’s because it’s organic (the plantation possesses the certification to label their product ‘organic’  for exports to the USA, Europe and Japan), because it has a high quality (due to the rich soil and the ideal climate of the Galapagos), because of the rarity of the Galapagos bean, and, last but not least, also because of its really nice taste.

The taste of coffee is made up by the combination of its body, its acidity and its aroma. The better the balance between these three, the smoother the coffee. Galapagos coffee is very balanced and therefore considered ‘gourmet’. Some people even say it’s the best coffee in the world! I’d say that makes for a good gift to bring home from your travels, don’t you? And if you don’t know any coffee-lovers, don’t panic: I don’t think the souvenir-shops will run out of the “I love Boobies”-shirts anytime soon. Phew!

Our visit to the coffee plantation was organised by the wonderful Emilee from GalaKiwi, the land-based tour company that invited us to the Galapagos. This kind of visit is not normally part of their tours, but they are happy to arrange it on customized journeys.