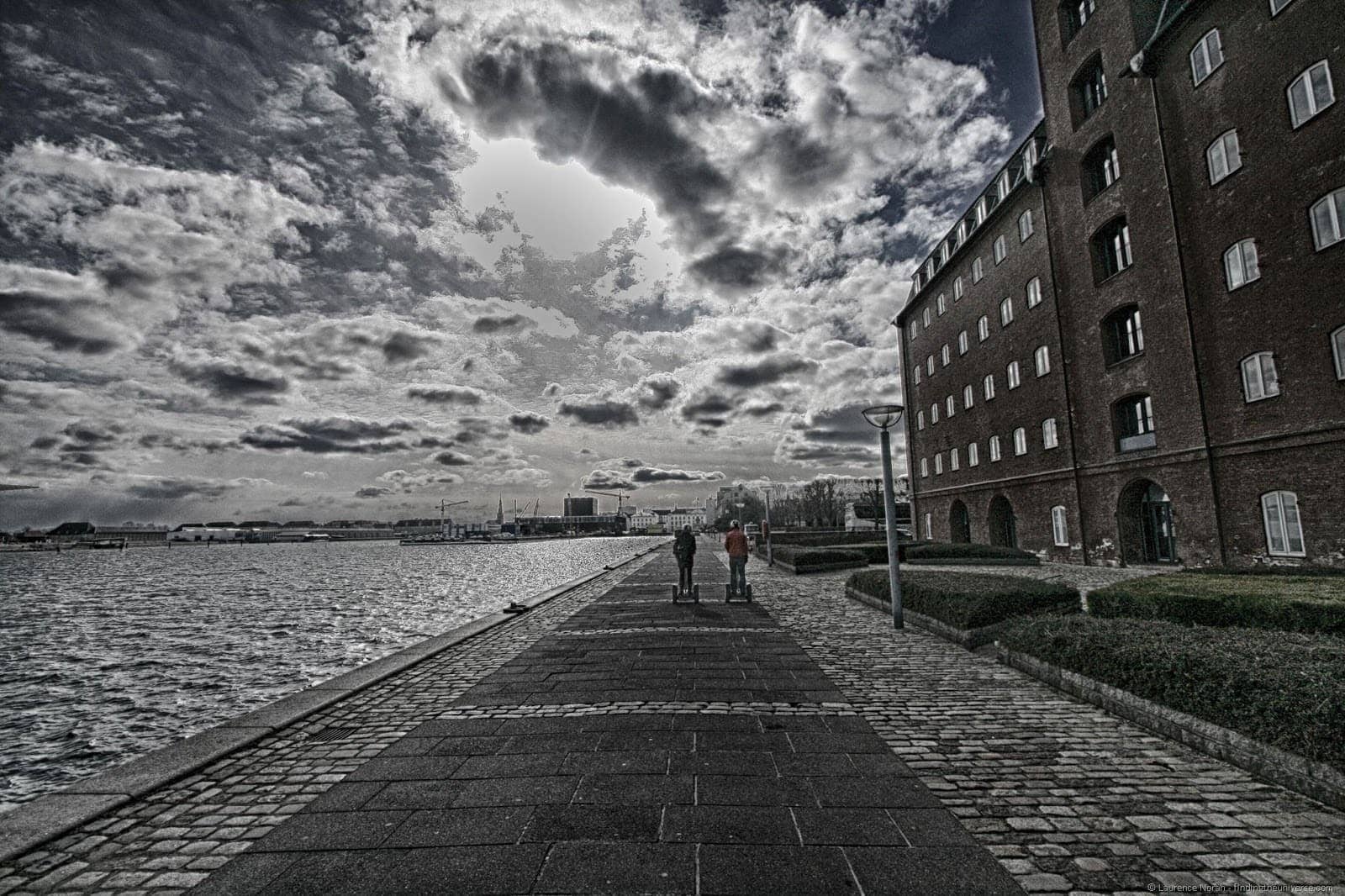 Home » Destinations » Europe » Sweden » What the Segway? A tour through Copenhagen.
Finding the Universe contains affiliate links, meaning if you make a purchase through these links, we may earn a commission at no extra cost to you.

Every now and again, Loz fails completely. Like when we went to Copenhagen.

He looks at me, very excited, beaming: “I booked us on a city tour through Copenhagen – a Segway tour!!”

I smile politely back: “That’s great. What’s a Segway?”

“A Segway! Oh, you know them – they are these big electric scooters where you basically stand on a little platform and drive around. I did a tour once in Chicago; that was really cool.”

“Wait,”, I say, ”you mean these things people use in airports or on big conferences? I thought you had to wear a suit to use them – because I’ve never seen anyone without a suit use them…”

Loz is not impressed by my attempt to be humorous: “They are really fun, you know!”

I’m sure they are fun – but so far it was me having the fun watching people like they were on a Mars mission on these big-wheeled vehicles. In my head people using Segways are not cool, you know. Not like skate-boarders or BMX-bikers or quad-bikers. Segway doesn’t scream ‘action’ or ‘skill’. And some people wouldn’t be caught dead on a Segway, I’m sure.

But let’s not think about it too much, I tell myself, because apparently, I soon will be segwaying (is that a real word?) through a big city and everyone will stare at me and then something embarrassing will happen, like I’m driving into a lamp-pole, because that’s what usually happens, let’s be honest here. Hooray.

So on a Monday morning we make our way to the Segway Tours office in Copenhagen. It’s not warm. In fact, we look like we are about to board an expedition into Antarctica. Scarfs wrapped around our faces, we enter the office. Sam, who is going to be our guide, probably thinks we have come to rob him…

We all say hi and chat a bit. Then comes an incredibly glorious moment: we get our helmets – and they look GOOD on us! Yes, I know, hard to believe. They also have a built-in radio so Sam can talk to us during the tour, and a mounting bracket for a Go-Pro camera if we feel like videoing my encounter with the lamp-pole. Maybe next time…

Outside we hop – today’s group only consists of the three of us. I can’t blame anyone for not wanting to slowly freeze to death on a Segway Tour in a Copenhagen that boasts cosy –6 degrees (-18, if you add the wind). Luckily the Segways have bright red oven mittens attached to the steering bar, and Sam announces that we’ll be taking a little break in between the tour and warm up in a café.

I step on the Segway and Sam motherly pulls the oven mitts over my wrists before he gives me some instructions and tips on how to move and steer. I nod and carefully start moving. Very slowly (you never know what a sudden movement will do, do you). Slow as a snail, in fact. Because there is a lamp-post in our practice area, and it’s looking at me. Sam is also looking at me, and after he’s happy with how I’m doing, we’re off to the real world. 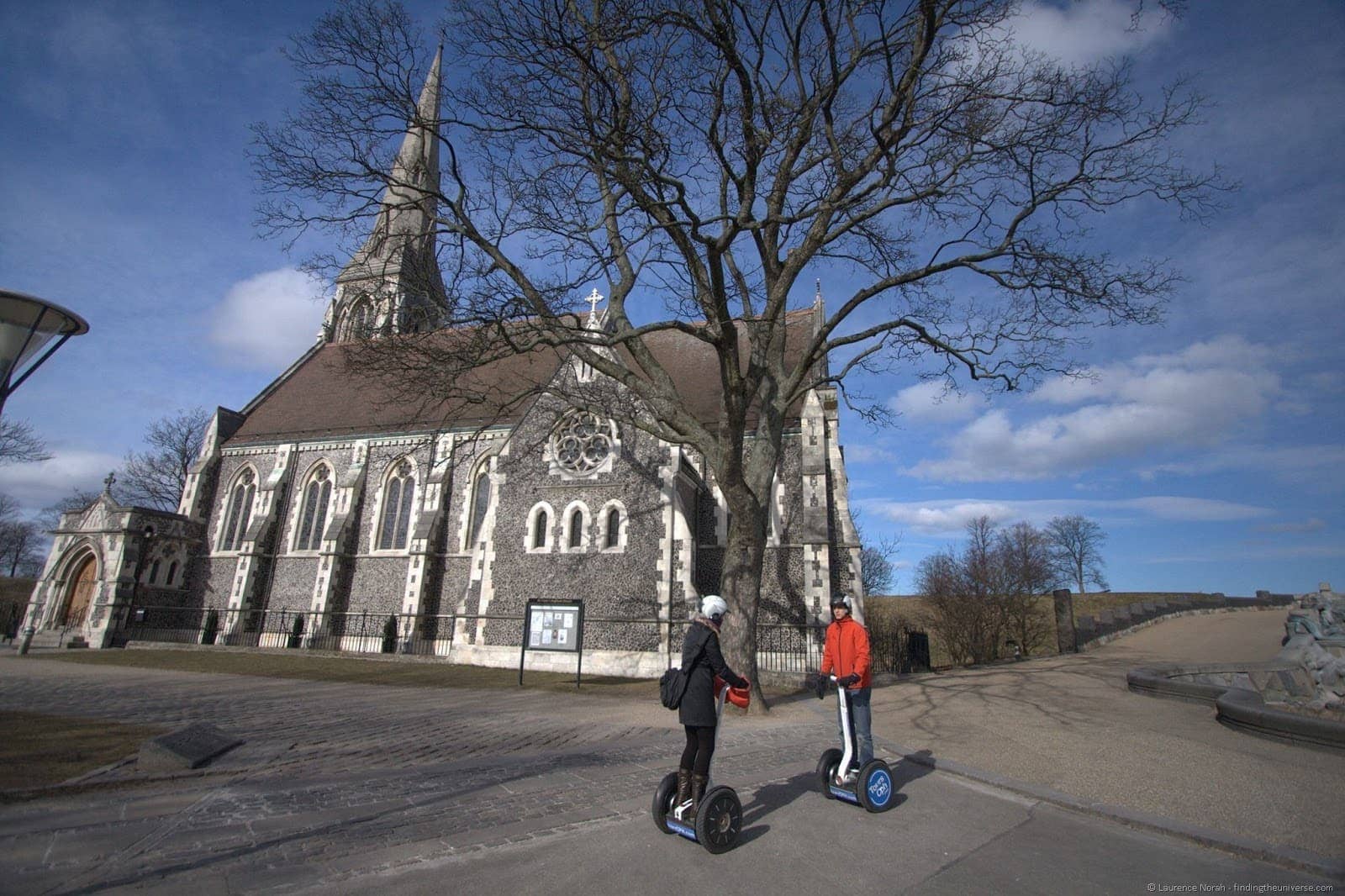 Copenhagen is one of those cities where cycling is very popular. In fact, the average Copenhagener possesses two bikes! This means there are cycle paths everywhere and they are fairly spacious as well. Segways fall under the bike category when it comes to transport, so we happily drive along the cycle paths.

It doesn’t take long until I think that this is pretty much the perfect way to do a tour. It’s an absolutely beautiful day and because there is so much to see, I even forget about the cold. From one point on I manage to take pictures while standing on the Segway, even though I can’t quite keep it from moving. The guys blame it on my lack of balance. Oh yeah? …Damn.

Sam points out the different sights and has a lot of tales to tell. He is originally from England, but he has lived here for a while now and contributes to the tour by sharing some stories from his every day life as well. For example, when he was apartment hunting he learned that a lot of the older houses used to have common showers in the basement, due to the expensiveness of plumbing.

When plumbing became more affordable, every apartment could have its own shower – but now there was the problem of finding a space for it. This resulted in apartments where you have your shower in the kitchen, for example. I mean, I guess you can save time when you’re in a hurry by taking a shower while fixing yourself something to eat…

The modern times – it’s all about multi-tasking, isn’t it? I haven’t considered doing a city tour in a while because I often found it a bit boring in the past, but this is different. Driving the Segway while getting shown the sights is fun. There, I said it. It’s fun! Sam confirms my discovery by saying that each time when he steps on his Segway to take people around Copenhagen, he’s excited again – it never gets boring.

We somehow manage to blow the two hour concept of the tour but it turns out that Copenhagen has a lot of sights as well as many interesting corners. Also we have the warm-up coffee break in between – but not anywhere: it’s the place where Princess Marie herself gets her hot chocolate from. She doesn’t make an appearance while we are there which is for the best as Sam has not properly briefed us how to behave towards Danish royalty. 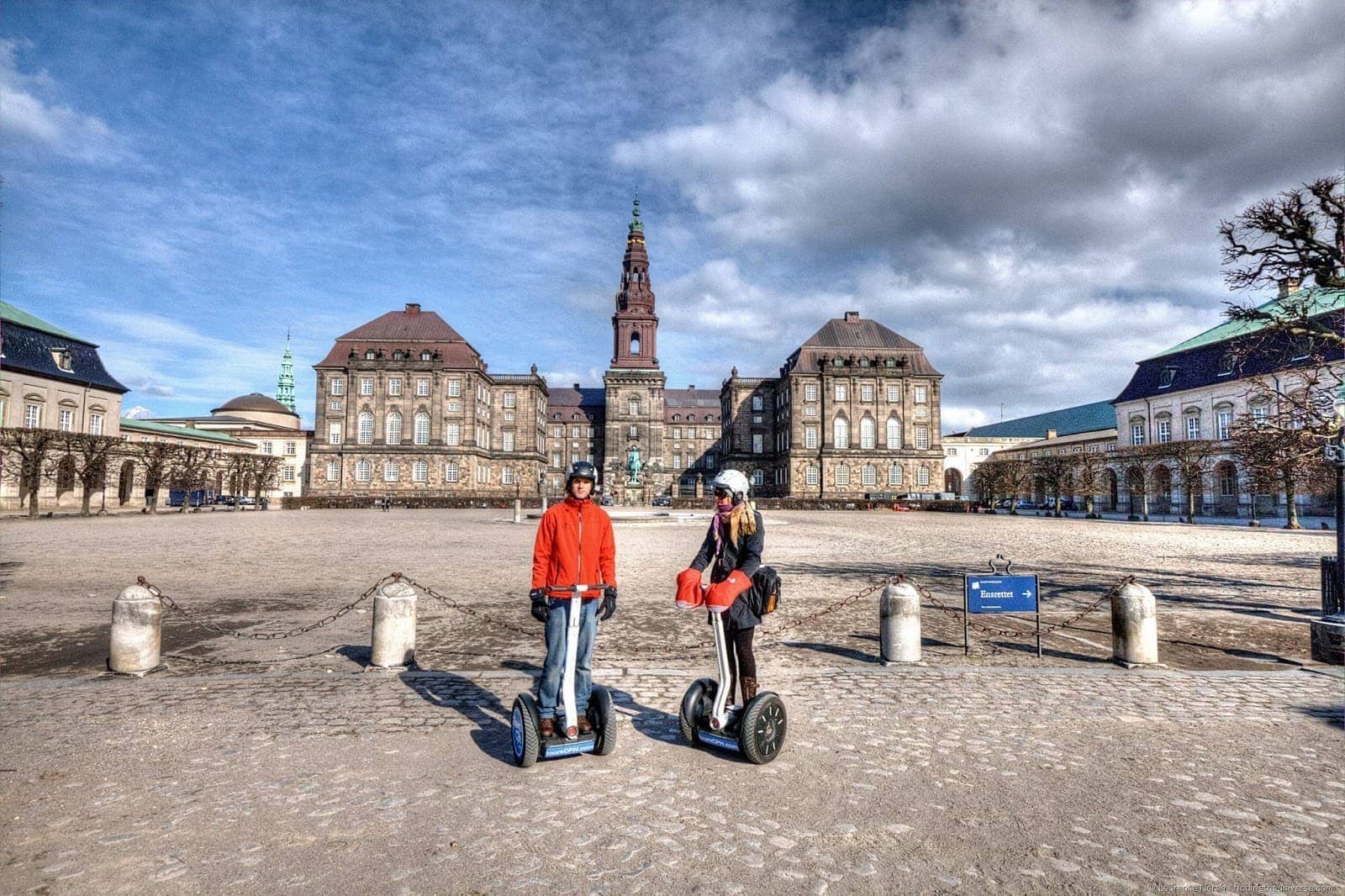 Apart from that, we learn quite a lot. We see the oldest building in Denmark, we find out how to tell which members of the Royal family are currently in the Royal Palace, we get shown the place where to get the best sandwiches in Copenhagen, we Segway along the lake where Hans Christian Anderson might have been inspired to write “The ugly duckling”, we see the house where he lived while he wrote it.

We cross the first street in Copenhagen that went two ways and that was built by the Carlsberg brewery. We see “soft graffiti”, hear of festivals, drive past art work, historic buildings and even through a cemetery. We see ships and the little mermaid, the opera house and the parliament – and much, much more.

We feel we’re getting a very good impression of all the different layers and facets Copenhagen consists of, and when we suddenly find ourselves in front of the tour office again, 14 km later, I realise that not only every lamp-pole in Copenhagen is still un-harmed, but that I am converted: Segways rock.

I know, you’re a bit sad now that I didn’t end up in a lamp-pole, but even I get a break every now and again. Or it is because I’m a natural Segway talent? We shall see the the next time when I step on my new favourite Mars scooter!

Should you in the meantime feel intrigued to roll around between the sights of Copenhagen, I highly recommend the Segway tour from ToursCPH (who are also authorized by Segway). They advise to book in advance, which you can easily do via the booking site GetYourGuide. Do think about how good you’ll look good in that helmet – kind of like a helicopter pilot! A helicopter pilot on a scooter, admittedly.

So, are you rather suspicious towards the whole business like I was, or can’t you wait to hop onto one of these things, or have you already segwayed – with or without hitting a lamp-pole in the process? Do tell!

Our tour of Copenhagen by Segway was kindly provided to us by GetYourGuide. Our ability to make a two hour tour last three hours and manage to not fall off is our own, as are our thoughts in this post.


Home » Destinations » Europe » Sweden » What the Segway? A tour through Copenhagen.