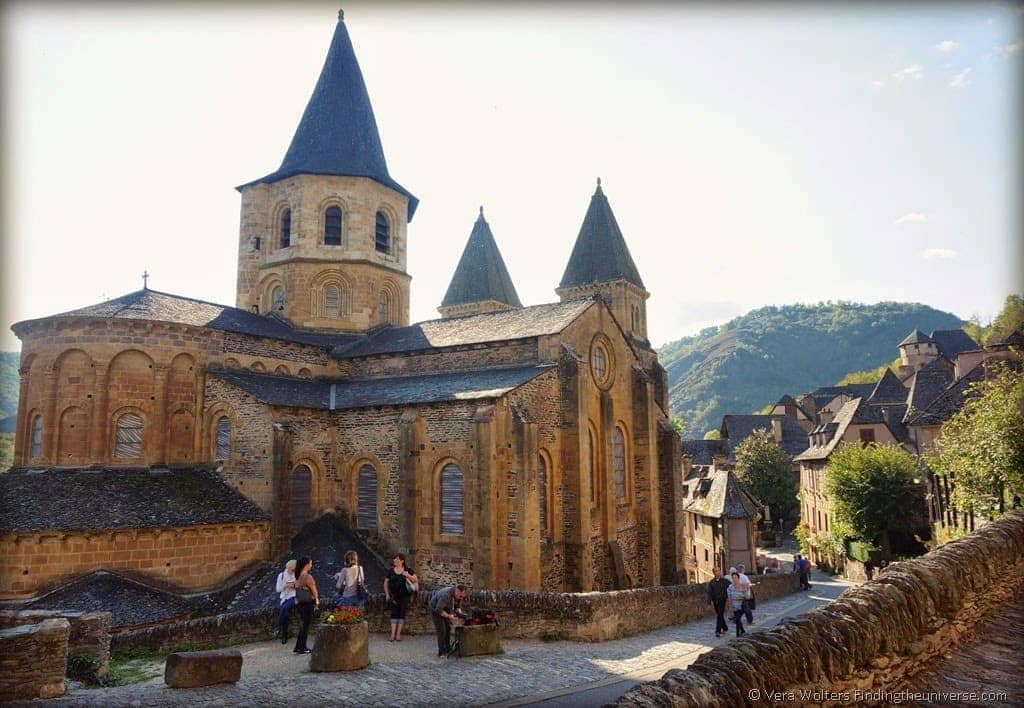 Home » Destinations » Europe » France » Conques–Visiting a Saint
Finding the Universe contains affiliate links, meaning if you make a purchase through these links, we may earn a commission at no extra cost to you.

The Aveyron region in the South of France is ridiculously picturesque – it has mountains and rivers, hills and valleys, forests and gorges, and a combined 900 km of footpaths that can keep you occupied if you’re the type who likes to discover places by foot. It also has ten towns that have been declared to be amongst the “Most beautiful villages in France”, which makes Aveyron the leading department in France in that category.

Conques is one of these villages, though being on the list of “The most beautiful villages in France” is only one of the reasons people are drawn to the place. The town’s main importance stems from having been (and still being) a very popular part of the pilgrimage to Santiago de Compostela for centuries. In fact, the abbey-church of Conques is registered on the Unesco World Heritage list for the Trails to Santiago in France.

Still, one wonders how this tiny village (90 residents, go figure) in a pretty remote corner of France became a place that attracts half a million of visitors per year, of which 30,000 are pilgrims. Don’t wonder too long though, my friends, because I am going to tell you (otherwise this would be a rather short post)!

The Beginnings and Evolution of Conques 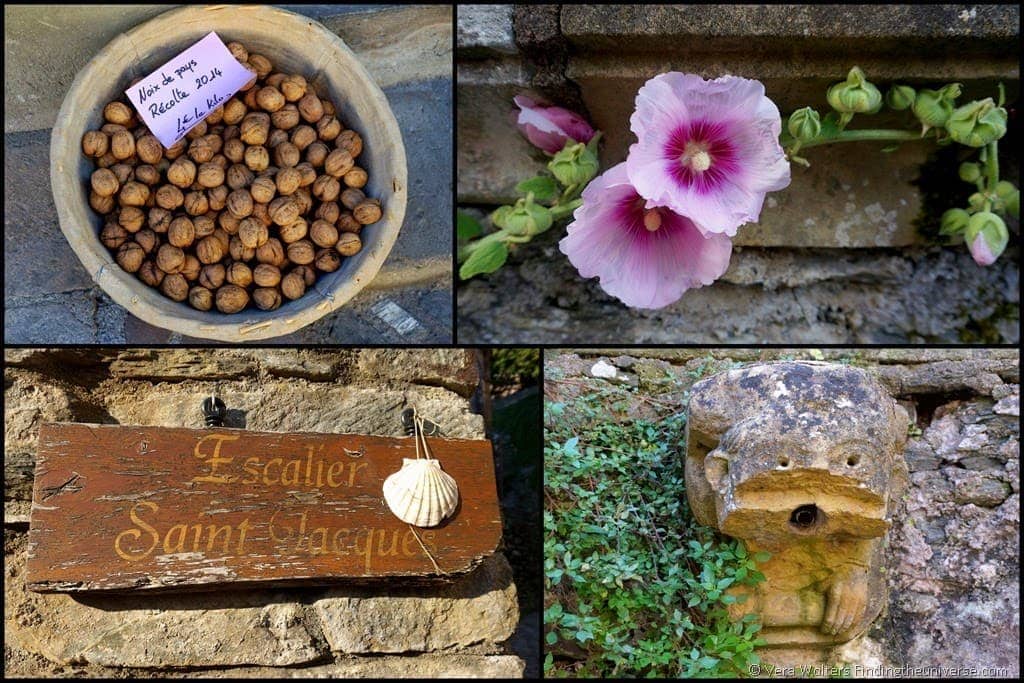 “Conques” has nothing to do with conkers (maybe I’m the only one to make this connection), but comes from the Latin word “conchas”, meaning “shell”. ‘Aha!’, I thought, ‘because the symbol of St. James of Santiago de Compostela is a shell!’. That was my second misapprehension: the name refers to the town’s position on the slopes above a gorge. Nevermind.

It was this place that a hermit named Dadon decided was ideal to retreat from the world from in the 8th century. He built a little monastery, and it could all have been very peaceful and quiet, but it wasn’t to be. Because in 866, the relics of Ste Foy (we’ll get to her gruesome story later) made their way to the village from the French town of Agen.

Rumour has it that a monk from Conques went undercover as a monk in Agen for almost 10 years in order to get close enough to the relics to –gasp!- steal them. To which Conques dryly states: “The legality of the acquisition is still a contentious issue.”. There’s nothing quite as exciting as a good legal dispute spanning centuries, eh! 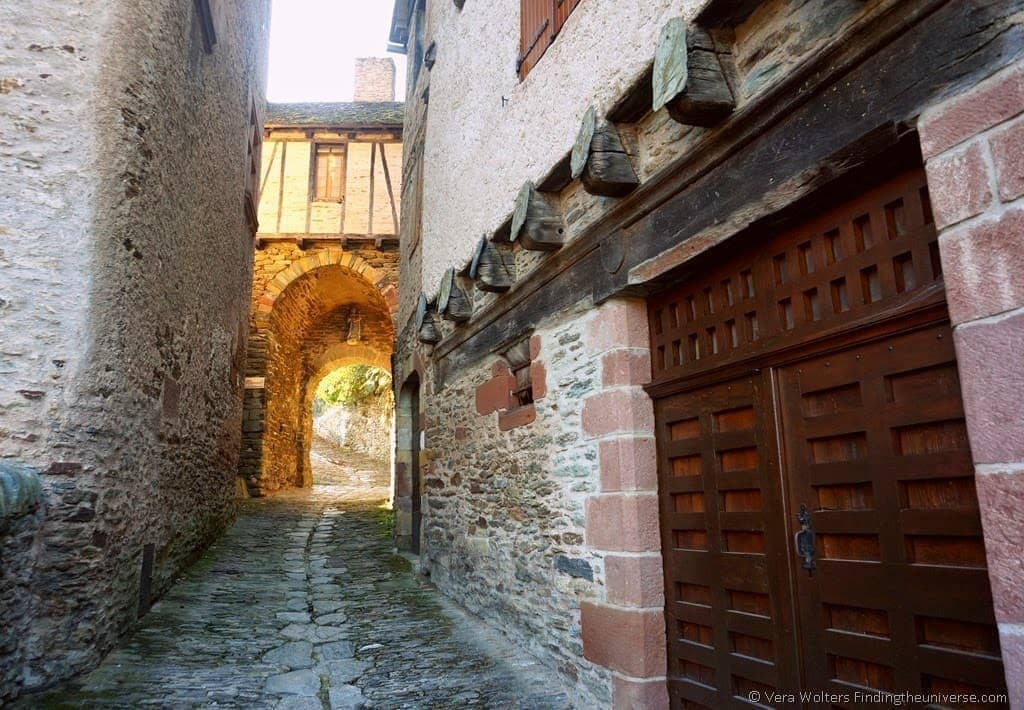 However, once the relics of Ste Foy came to Conques, they changed everything. Pilgrims and visitors came in flocks, and Conques became a major staging post on the way to Santiago de Compostela. The reputation of the relic’s miracles resulted in generous donations and thus in an extraordinary collection of medieval gold.

Where do you go from there? You expand, of course! From 1030 to 1130, the Romanesque abbey-church of Conques was built, in order to adapt to the many, many visitors. The rest is history.

And history has been very kind to Conques. Due to its remoteness, not much has happened since the middle ages. The shock waves of major historic events may have hit it, but not as hard as other places. Walking through cobbled alleyways, there are ramparts, fortified gateways, towers, two bread ovens, framed houses, fountains. The buildings here are incredibly well preserved and taken care of, utility lines are buried, and you might as well have stepped back in time.

The Abbey-Church of Ste Foy

This church (as well as a lot of the rest of Conques) gets lovers  and connoisseurs of Romanesque architecture drooling. Personally, I prefer to drool over chocolate, but there’s more to the church than it being a Romanesque masterpiece.

There’s for example also an incredible collection of Romanesque sculpted decorations (did I hear anyone scream “Yay!”?). Let me elaborate: it’s basically a Romanesque 3D stone picture book all over the place. Now, these sculptures are not ‘in your face’ – on first glance, the abbey-church looks pretty bleak, and only on second look, you discover that there are little sculpted ‘pictures’ everywhere. 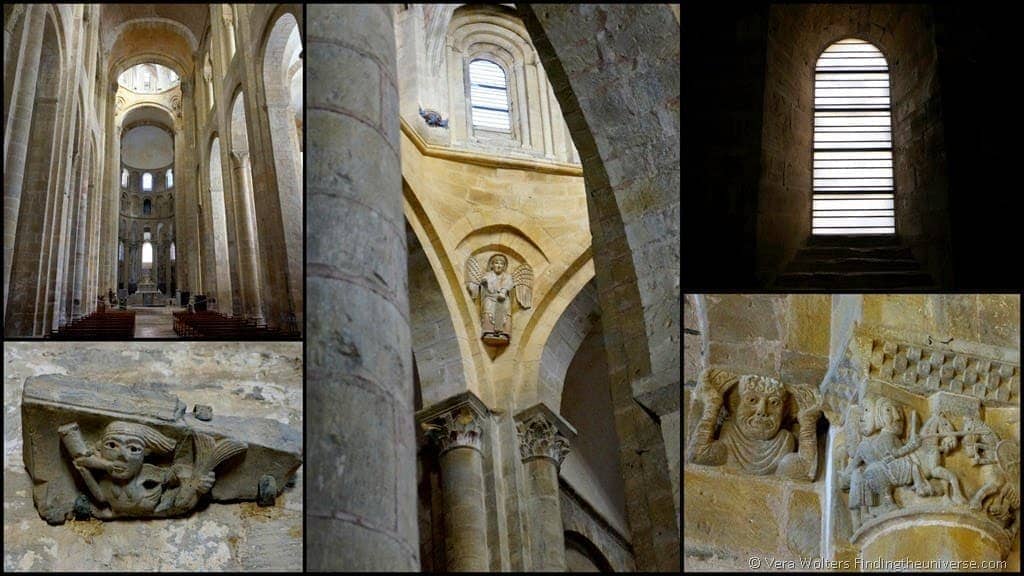 And surprise, they are really cool! It’s not all religious art, either; you also have knights, mermaids and griffins. However, the showpiece and culmination of this demonstration of artistic skill and heritage is a bit more ostentatious: outside, above the doorway to the church, is a very famous semi-circular decoration called “The Tympanum of the Last Judgement”. Spoiler: it looks like the Last Judgement is going to be preeeetty horrific for some people. 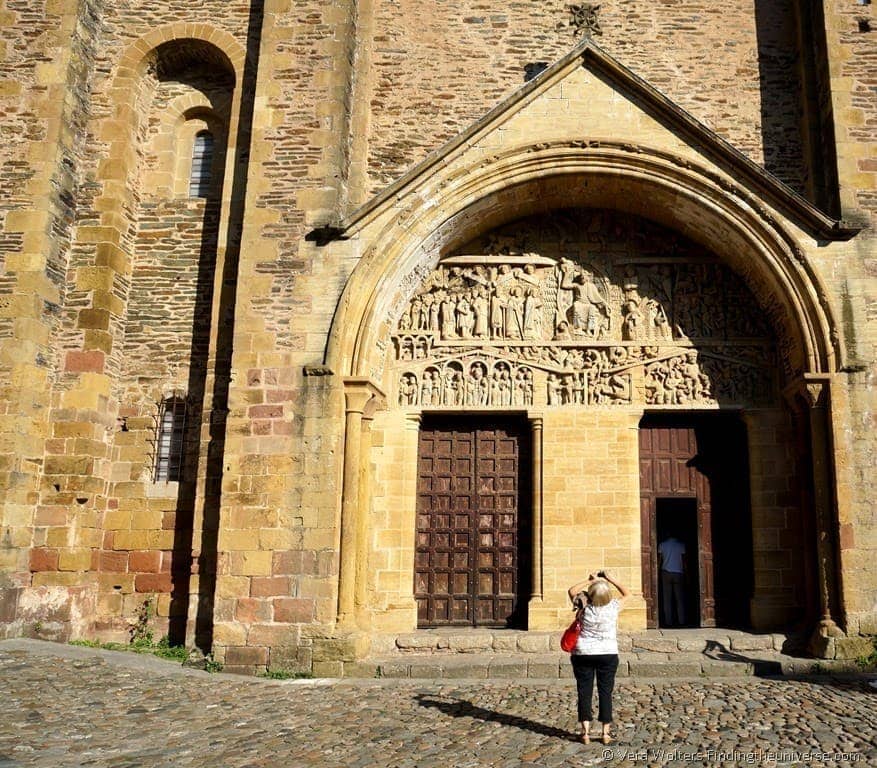 Although this particular art work might as well have a PG rating, it is not the controversial bit about the abbey-church. No, that would be – the windows! Yeah, I know, that would have been my first guess, too.

I think the controversy is not about the windows themselves, because they are masterpieces of their own kind and only compliment the church in the way they let the light pass through (more information here), but about the person who was ordered to design them: Pierre Soulages, a contemporary painter. If you want to know just how contemporary, have a look at a prior post about him and his museum in Rodez, Aveyron. Or take my word on that it’s not just a little bit contemporary.

It has to be said that this was a pretty extraordinary collaboration, because Pierre Soulage has always rejected inquiries of churches. Conques though is special to him: “When I was fourteen, it was in front of Conques abbey-church that I made art my sole interest in life. (…) Conques is the site of my first artistic emotions.”. So who knows what might happen to YOU when you visit Conques! Just saying.

The Treasure of Conques 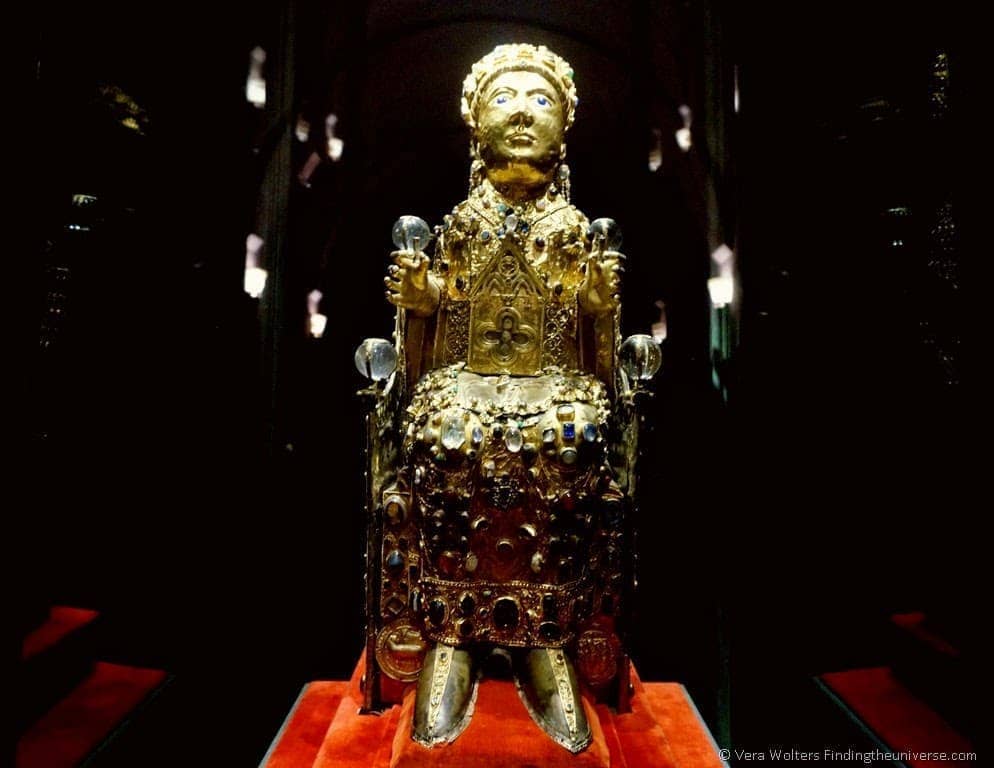 The most important piece of the treasure which is one of the five greatest medieval gold plated treasures in Europe must be the statue of the Majesty of Sainte Foy, which contains the relic I have already told you about: the top of the head of the saint. Yes, it’s all not very subtle.

And although this statue as well as other objects were classified as Historical Monuments in 1875, they are still being used by the church. For instance, each year on the 6th of October, it is Sainte Foy Feast Day in Conques, which includes a procession with the relics.

So who is this martyr virgin Sainte Foy (Saint Faith)? She was a 12-year-old girl, born around 290 AD, daughter of a wealthy and pagan family in Agen. Her nursemaid was Christian and the young girl embraced the faith. When the Roman emperor Diocletian initiated the persecution of all Christians in 303 AD, Sainte Foy was brought to trial before the local governor. She was ordered to sacrifice to the goddess Diana, but refused. Thus she was tied onto a metal grill which was positioned over a fire to be burnt alive. When the flames miraculously extinguished, she was beheaded. 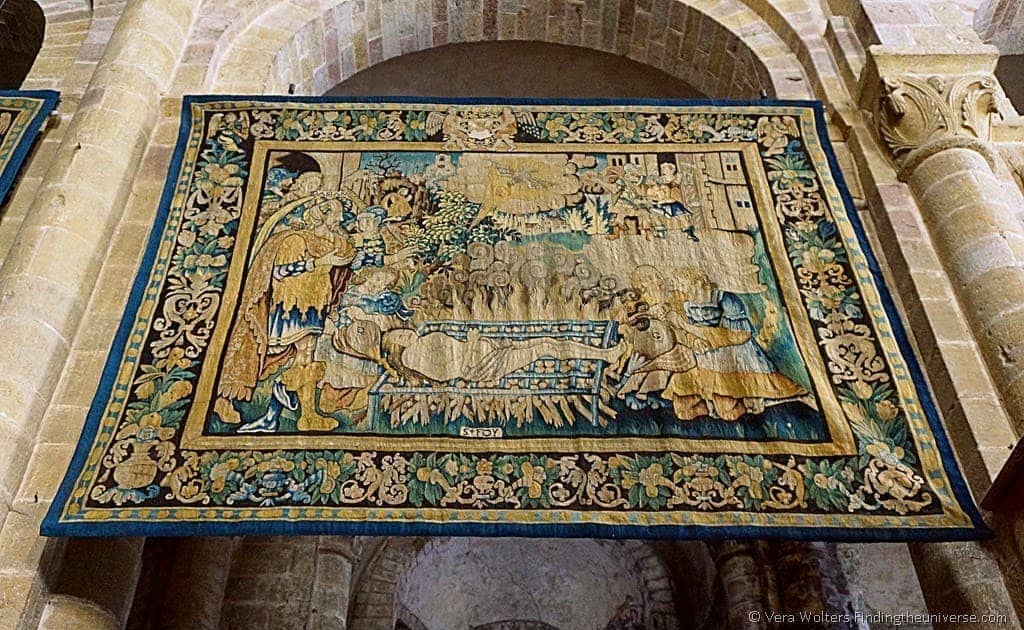 Her remains were taken by other Christians and ended up as relics, which were very powerful items back then (and probably still are today for a lot of people).

The reason why the treasure of Conques remains the only one in France that has that many reliquaries even from the beginning of the middle ages is not a coincidence, by the way.

During the French Revolution the convention ordered that the treasures of the church were to be confiscated and melted down to obtain money. Although the people of Conques could not prevent the revolutionaries from burning their archive, they managed to hide the treasure. They basically ‘stole’ it from the church and hid it all over the place – in chimneys, sheds, buried in a vegetable garden – and for years and years, until Napoleon came to power, and it was safe again to return them to the church. 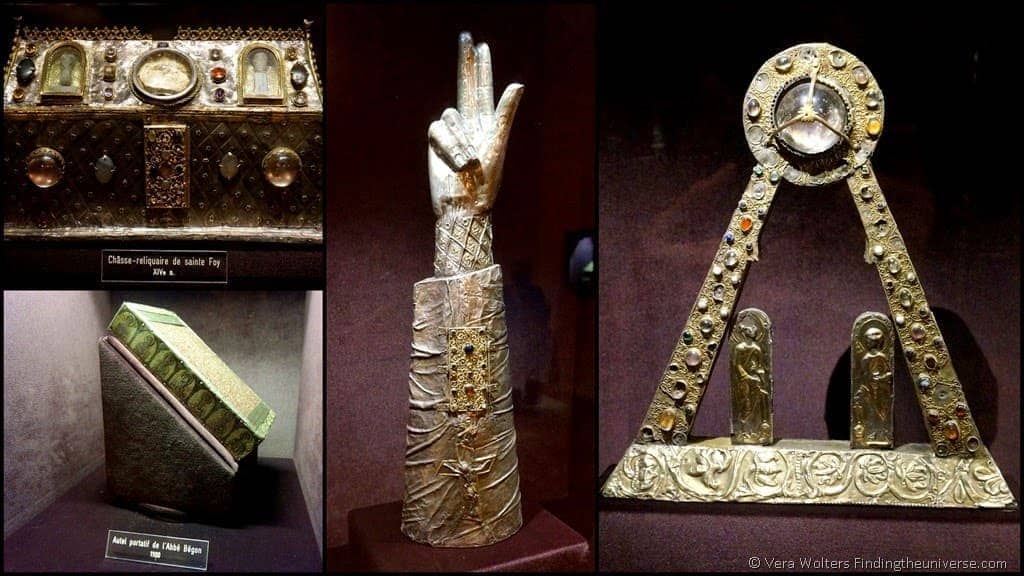 As pretty much always, I suggest you visit the Tourist Information Centre which is quite central and, dare I say, hard to miss. Not only might you get some material that will help you get the most out of your visit, but there are also a number of inexpensive guided walks and tours you can book, be it for the village or for example for the abbey-church uppergallery. We had a lovely guide taking us around (thank you, Anne!) and benefitted very much from it!

If you want to stay overnight, be aware that from April to October it’s ‘pilgrim season’, so booking ahead might be useful.

And the rest is up to you! I hope you enjoyed the post, safe travels and thanks for reading!

Last but not least, a big thank you to the Aveyron Tourism Board for introducing us to their beautiful region and hosting us, namely Jackie and Camille. I’d also like to mention that if you’re visiting from the UK, return fares from London with the French Railway SNCF start at 140 GBP (do check prices for first class, too – sometimes the difference is just a few Pounds!). Now you know – cheers!