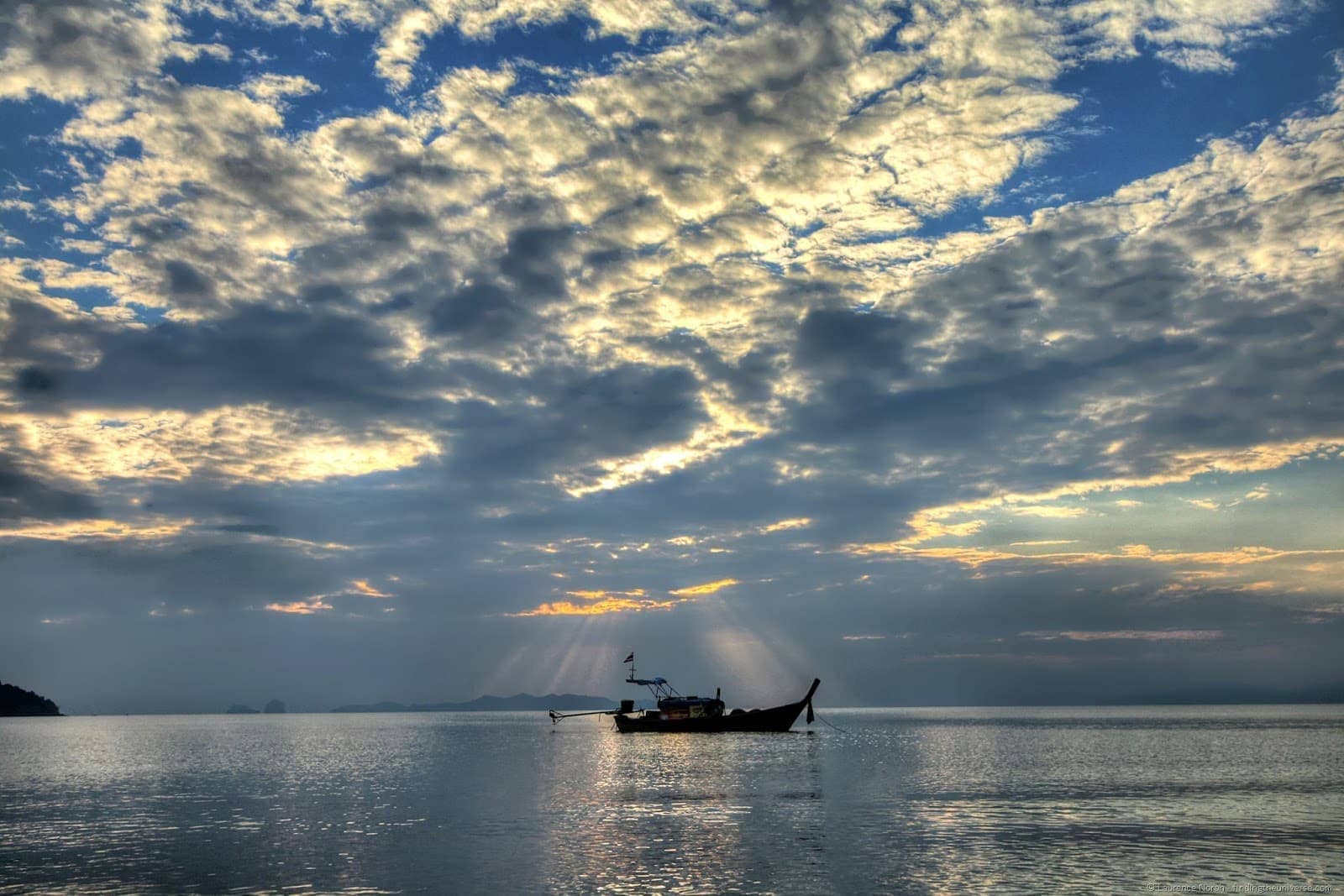 Home » Destinations » Asia » Thailand » Laytrang Resort – a Thai diet on the Andaman Coast
Finding the Universe contains affiliate links, meaning if you make a purchase through these links, we may earn a commission at no extra cost to you.

There’s one serious problem in Thailand: the food is just too good. Okay, so maybe that’s not a problem for people who don’t enjoy eating very much (where are you folks? Haven’t met any of you yet!), but Loz and I certainly don’t belong to that group.

And Thailand is mean, my friends: tasty stuff everywhere. There’s hardly a street without a multitude of tiny carts, loaded with anything that could tickle your fancy, be it fruit, smoothies and shakes, sticky rice banana, whole regular meals even – and fried stuff. Oh, the fried stuff. Danger, danger.

We did fairly well, it has to be said. Always being out and about made excessive night market stints (“Oh God, I’m so full! –Wait, is this ‘ancient ice-cream’? Oooh…”) more or less forgotten. But when there’s a period where you don’t move around that much and keep on eating like there’s no tomorrow (could of course be the case, you never know), it takes a toll on your waistline.

Then we got to Trang, and that was the beginning of the end. We sure did a lot in and around Trang, but this involved plenty of eating as well because as it happens, Trang is home to numerous delicacies that set it apart from the rest of Thailand. Woohoo!

This ‘woohoo’ lost a fair amount of its original enthusiasm when it turned out that we had consequently attired a case of the well-known traveller’s shrinking belt syndrome. This was of course just before heading out to the islands, where you strut your stuff in shorts and a bikini. No room to hide the food sins you’ve committed. Unless you go Thai-style and jump in the water with all your clothes on, but we needed to get a tan, obviously. Is a tan not one of the traveller’s most important credentials? Why, naturally.

Then HostelBookers came to the rescue (they didn’t know that, though), asking us if we wanted to review a resort at  Pak Meng Beach (which is handily still part of the Trang region). We looked the place up and spotted one lonely comment on the infamous Tripadvisor-webpage from someone who complained that it was a two km walk away from the town centre and thus the shops and restaurants.

Loz joked that we would have to actually walk if we wanted to get our fried food fix on, but that made us realise the incredible potential this resort had: it would be our little diet island two km away from ‘the real world’, and to get food and other stuff, we would be forced to become active and, er, kind of swim out to the main island (the town centre)! So we agreed to chill out at Laytrang Resort, having this montage in our head, where we jog along the beach early in the morning (may I mention the unimportant background information that we both don’t jog) and end up with some nice toned beach bodies.

Significant fail dawned upon us as soon as we discovered upon our arrival that this resort offered home-made and inexpensive ice-cream, sold either in a waffle cone or a little bowl. In the name of science, we of course had to try it. Loz denied the waffle, and I thought: “Respect, he’s at least avoiding extra calories”, but had to find out later that he chose the bowl merely because it seemed to be the way to get more ice-cream. Hm. Maybe our whole plan wouldn’t really work so well.

We also found that we were not exactly isolated – apart from the resort restaurant and shop, there were a few other shops and also another restaurant around; even a little coffee shop and a tiny bar. And a food cart with fried stuff. Doom.

We avoided temptations by staying in. That’s what a resort is about, isn’t it? You don’t need the outer world, everything is on site. And the site was pretty much about chilling out. You could get your action going due to the resort being handily situated right at the pier where all the tours to the islands and caves leave from, but we had already been on various tours here and needn’t feel guilty about not taking advantage of that. 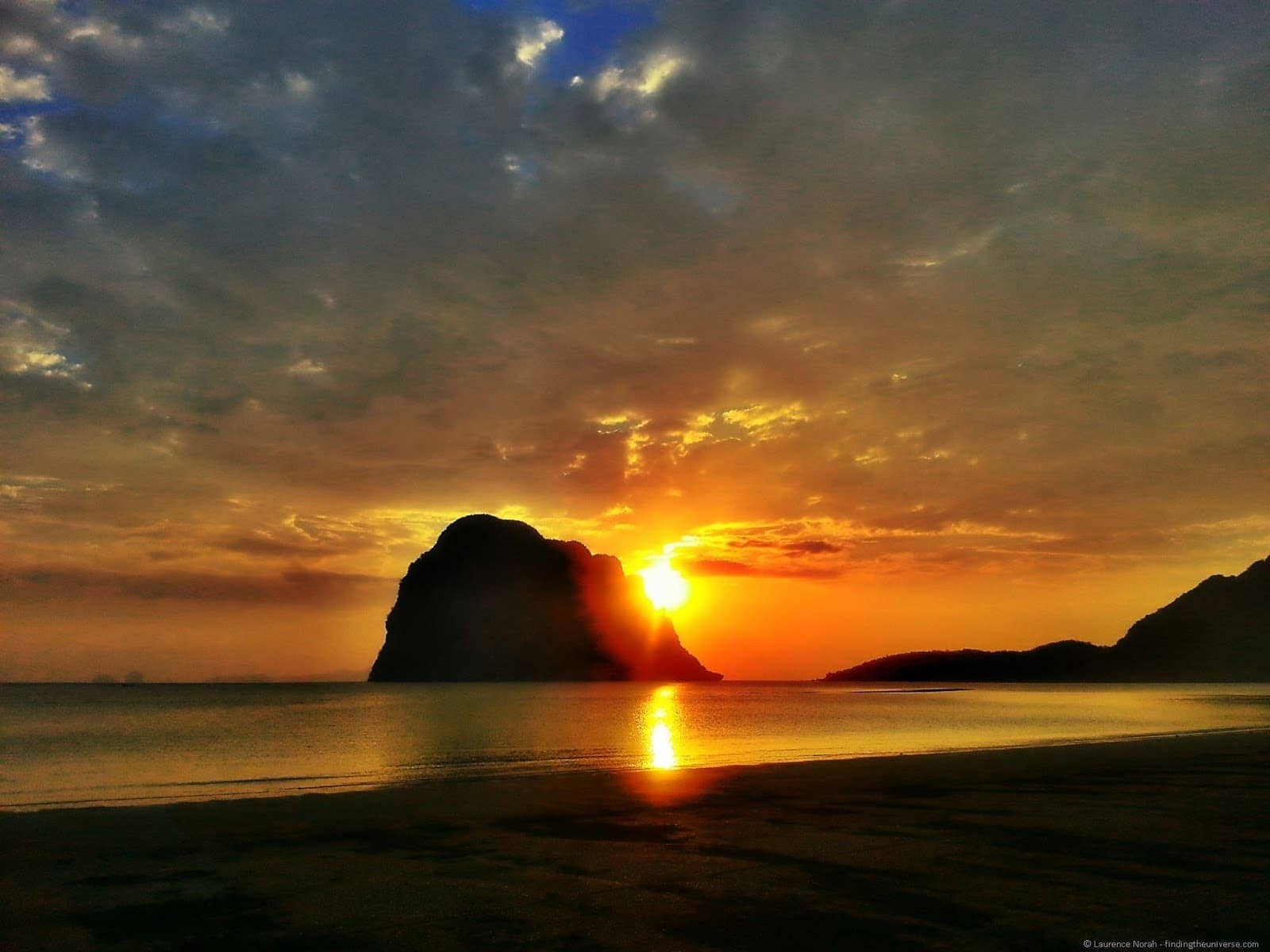 Also, we wanted to get some work done. Writing posts for the blog, you know. Or training the geckos to do it (they kept running away, though. Maybe an allergy to fame and fortune?). Of course writing is a very crafty and creative task, so Loz smartly started out by reading a fiction book he had found in the book shelf in the lobby. Because to write, you have to read. Everyone knows that.

But the montage! We set up a routine of walking half an hour along the beach to the town centre each day, where we then treated ourselves to ice coffee which contained two heaped table spoons of sugar per cup and tasted pretty amazing. We ignored that we had well seen the nice coffee lady pour the sugar in our cups, as it doesn’t count if you don’t know about it. Diet cheating rule no 4.  After this we would walk back again and lose even more calories getting excited about the beautiful sunsets (this must count!).

Somehow we didn’t really lose weight, though. So we gave up and focused on other things. Like working on blog-posts while enjoying this view: 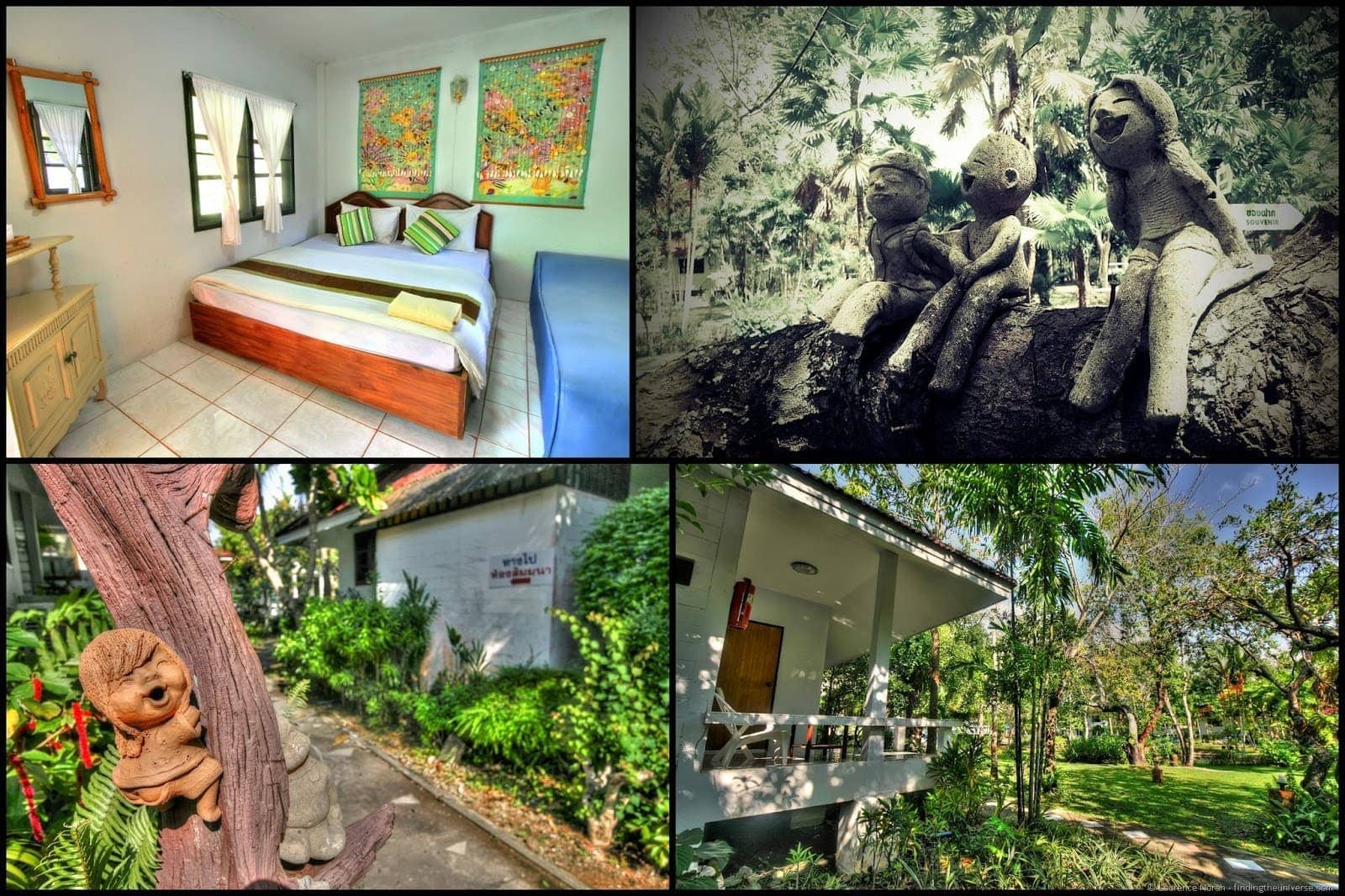 Well, so maybe Loz worked on blog-posts while I wrote post-cards. Sixty-three of them. Yes, that’s more than none. We also met a lovely American couple who were on a vacation from their teaching job in China. We secretly put them in charge for the activity based review of the resort. They rented canoes from the resort and paddled out to the next little island. They took a local ferry to the island of Koh Libong and had a guide show them around. They even extended their stay because they found the resort to be an excellent base. Which it is, but I think they really got hooked on the ice-cream.

The last couple of evenings we had dinner together at the resort – you know, you just run into each other and everything unfolds organically. I remember that on our last night, I ordered the spicy shrimp paste. Our waiter, smiling as always (he was SO nice!!), although a tad wryly after I had filed my order, looked at Loz who said: “Are you sure? If it already says ‘spicy’, it could be really spicy…” but I felt I was on a constant chilli-tolerance building mission, anyway, so I stayed with my decision.

I received a large plate with various raw vegetables, a multitude of leaves and a bowl of shrimp paste from the waiter who seemed to expect me to send it back to the kitchen instantly. Did he doubt my like of foreign… leaves? Challenge accepted! I smiled reassuringly: everything was under control!, and started eating. Many tissues later I came to the conclusion: it was a tasty deal, like always in Thailand, but boy, when they say ‘spicy’, they really mean it in the south!

It’s not always easy to estimate the respective level of spiciness as it is written down in the menu in Thailand. It depends how touristy the area is (then the dishes are not so spicy), on the region you are in (the South: very,very spicy), and sometimes on the cook who might find he doesn’t want to risk knocking you out of your shoes. But generally their rule is: if you order it, you can handle it. 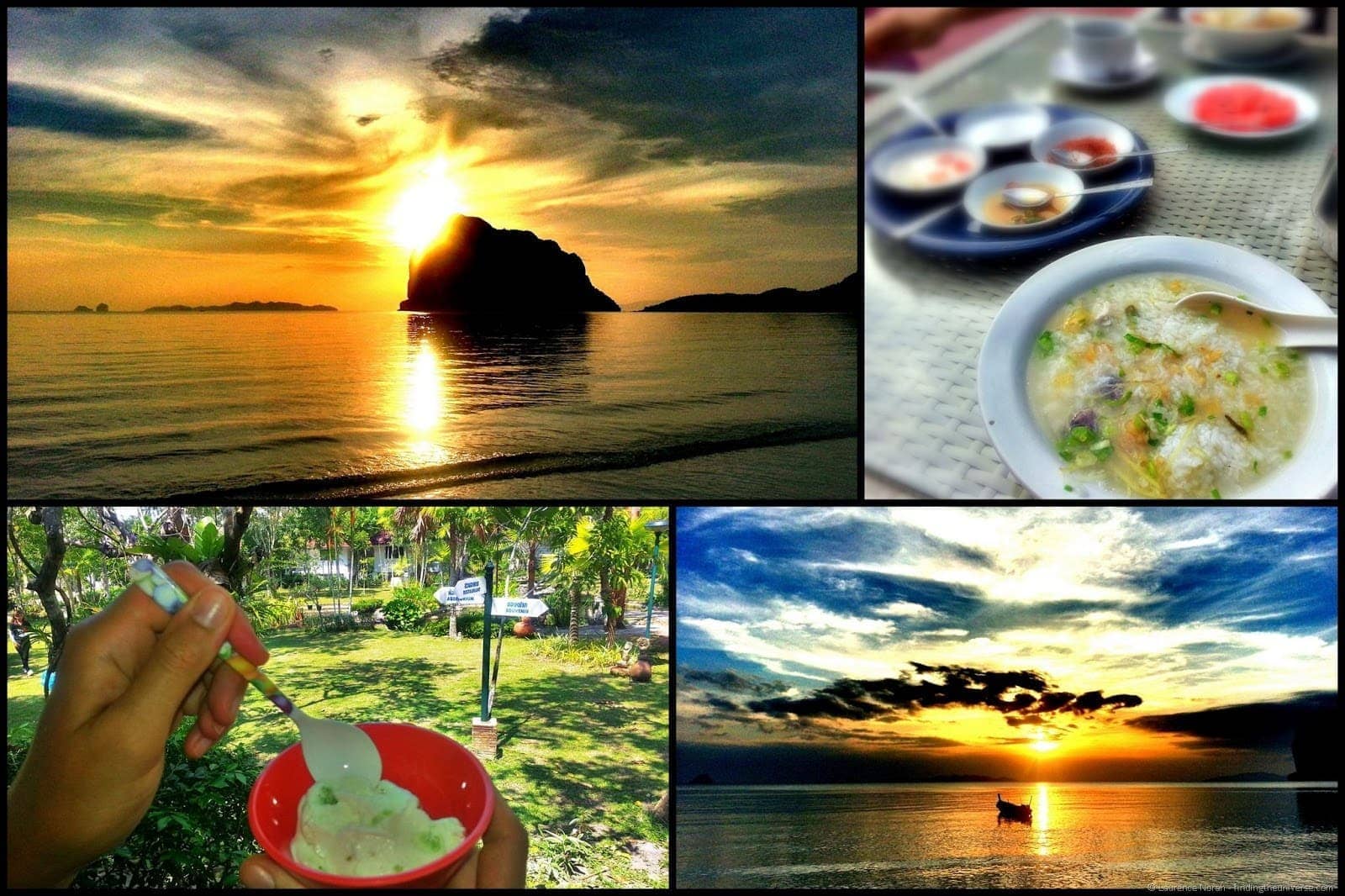 So anyway, I felt that sitting there, with my mouth wide open for a little bit of cooling, justified an ice-cream for dessert. Loz had one too, although I couldn’t quite see how he had deserved his. You’ve gotta earn it, don’t you?

And then, on the next morning, it was already time to leave (how could that have happened so quickly again? Miraculous). Only that we didn’t really know how. How would we get from the resort to Pak Meng Beach Centre, and from there to Trang? We hadn’t seen any Tuk-Tuks around, and all the mini-buses coming to the pier seemed to be from tour companies.

Silly us. When you’re in Thailand, there’s always a bus. Our waiter and general contact person lead us outside the resort and told us that there would be a mini-bus within five minutes. And there was! Also, all of a sudden ten other people appeared out of pretty much nowhere and filled the vehicle up.

Gets me every time. How do they do this? There’s always a bus, it’s always there within five minutes and they always manage to fill it up fairly well so as to not have to drive half-empty.

Forty-five minutes later we were back in Trang and hopped on another bus (a big one!) to our next adventure.

So maybe we didn’t lose weight whilst staying at Laytrang Resort, but we sure took a lot of (sunset) pictures, met some great people, managed to up our chilli tolerance, collected some shells on the beach, got some blog-posts and post-cards written and recharged our inner batteries more than sufficiently.

We didn’t even mind that it turned out that we had accidentally caught the slow bus to Satun, which managed to take four hours to drive the 125 km. Our reward was a cheerful lady coming on board with a little monkey wearing diapers. But that, my friends, would be another story.

Our stay at the Laytrang resort in Trang was provided to us by HostelBookers in exchange for penning our thoughts up. We’ll never let those thoughts be anything other than our fair appraisal, even if plied with ice cream 🙂