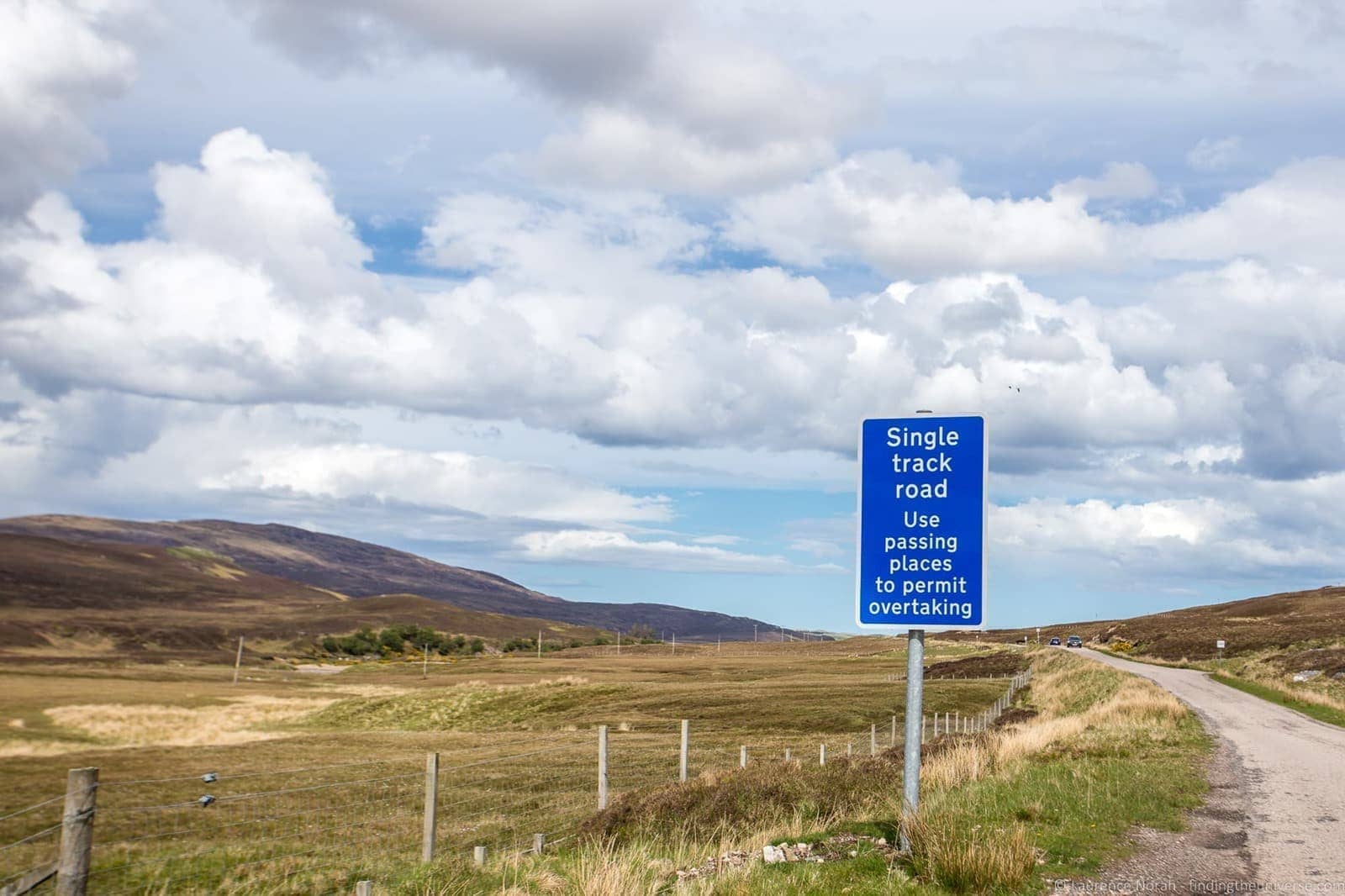 Home » Destinations » Europe » UK » Scotland » How To Drive on Single Track Roads
Finding the Universe contains affiliate links, meaning if you make a purchase through these links, we may earn a commission at no extra cost to you.

One thing we’ve noticed on our travels recently is that some of the countries we drive in, including popular destinations like Scotland and Iceland, have a number of single track roads. We’ve particularly observed that visitors can something find these tricky to navigate – especially for those not familiar with driving on single track roads.

In Scotland for example, many of the routes across the Scottish Highlands, including the beautiful Isle of Skye and other islands, heavily feature single track roads.

Single track roads aren’t a phenomenon that are unique to Scotland of course. They occur around the world, and we’ve encountered them on numerous road trips including in the USA, Australia, the UK, France, Iceland, Ireland and New Zealand, to name but a few.

Often side tracks roads are a back route rather than the main route. For remote parts of Scotland & Iceland though, even the main roads are single track. So knowing how to drive on a single track road is key to a safe trip!

In this post, I’m going to give you some tips for safe driving on single track roads. This advice will apply to most countries regardless of which side of the road you drive on.

In this section I’m going to answer all your questions about how to drive on a single track road, what to do when you encounter an oncoming vehicle, and other safety tips to keep in mind. First though, you might be wondering:

What is a Single Track Road? 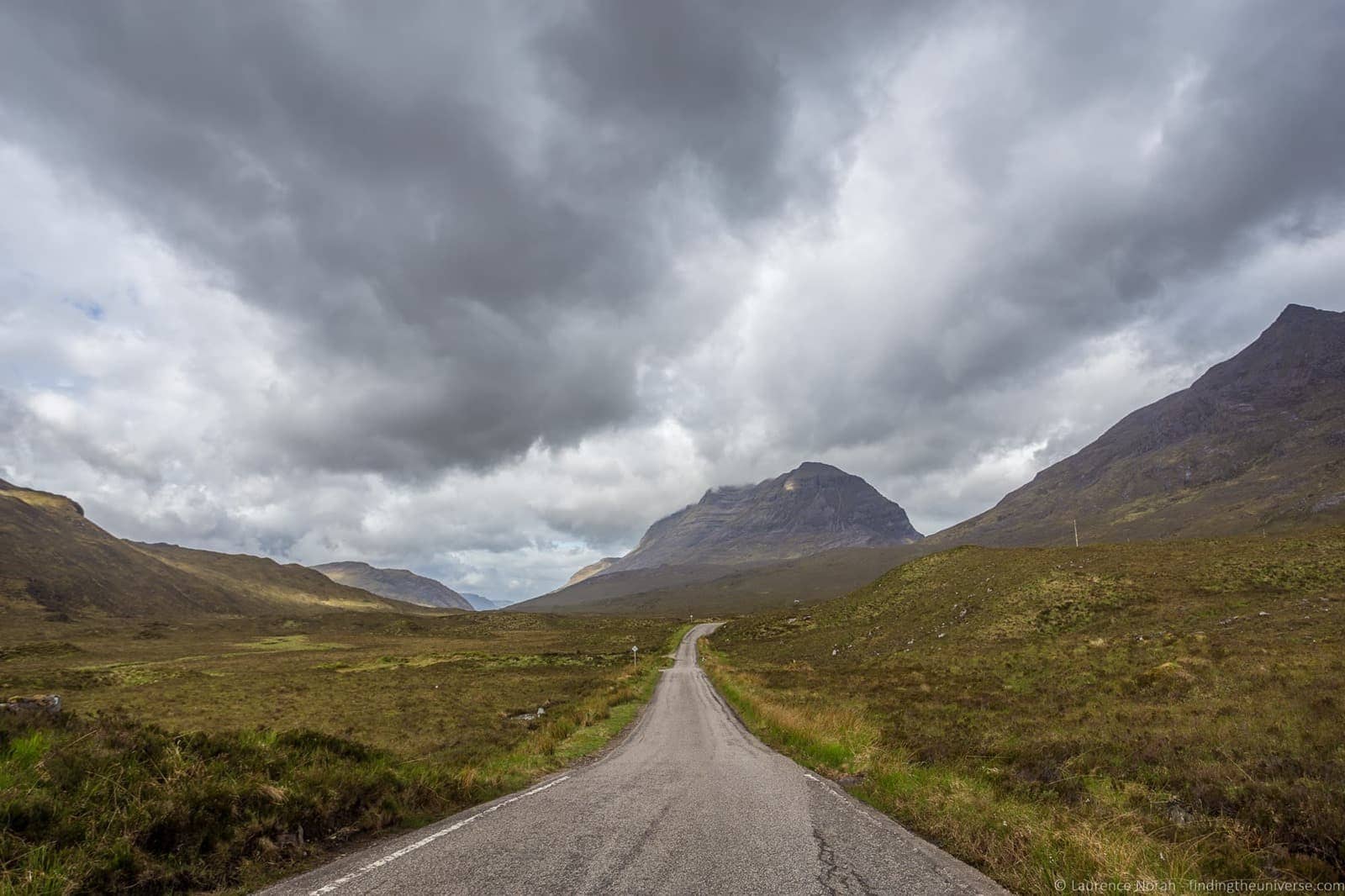 A single track road may also be known as a country road, country route, or a single lane road.

How to use a Passing Place

The biggest puzzle for new users of single track roads appears to be how to use the passing places. It’s quite easy, but we’ve seen people making simple mistakes in countries around the world.

The first rule is that you only pull into a passing place that is on the passenger side of your vehicle – not the drivers side. And don’t forget, if you are driving in a country like the UK and you are from the USA for example, the drivers side will be on the opposite side to what you are used to.

This might be easiest to visualise if you think about the road having two lanes. If you were driving a normal two lane road, you wouldn’t usually pull into a stopping place on the opposite side of the road, across the opposite flow of traffic. With a single track road, you don’t want to cross the flow of oncoming traffic either.

If you see a car stopped by a passing place waiting for you, with the passing place on your left, then you should pull into it. Sometimes the place will be large enough that you can do this without stopping, and just carefully drive in and out of the place. Sometimes this won’t be possible, and you will have to stop in the passing place and let the other vehicle drive on before you leave it.

One of the biggest mistakes we’ve seen in Scotland is drivers pulling into the passing place on the right side of their vehicle. This results in on-coming traffic having to pass the vehicle on the passenger side, which essentially means traffic is moving on the wrong side of the road.

In a worst case scenario, this could result in both vehicles attempting to enter the same passing place simultaneously, with obviously negative results! So it is very important that you only pull into the passing place on the left side. Here’s a diagram to help you visualise this. 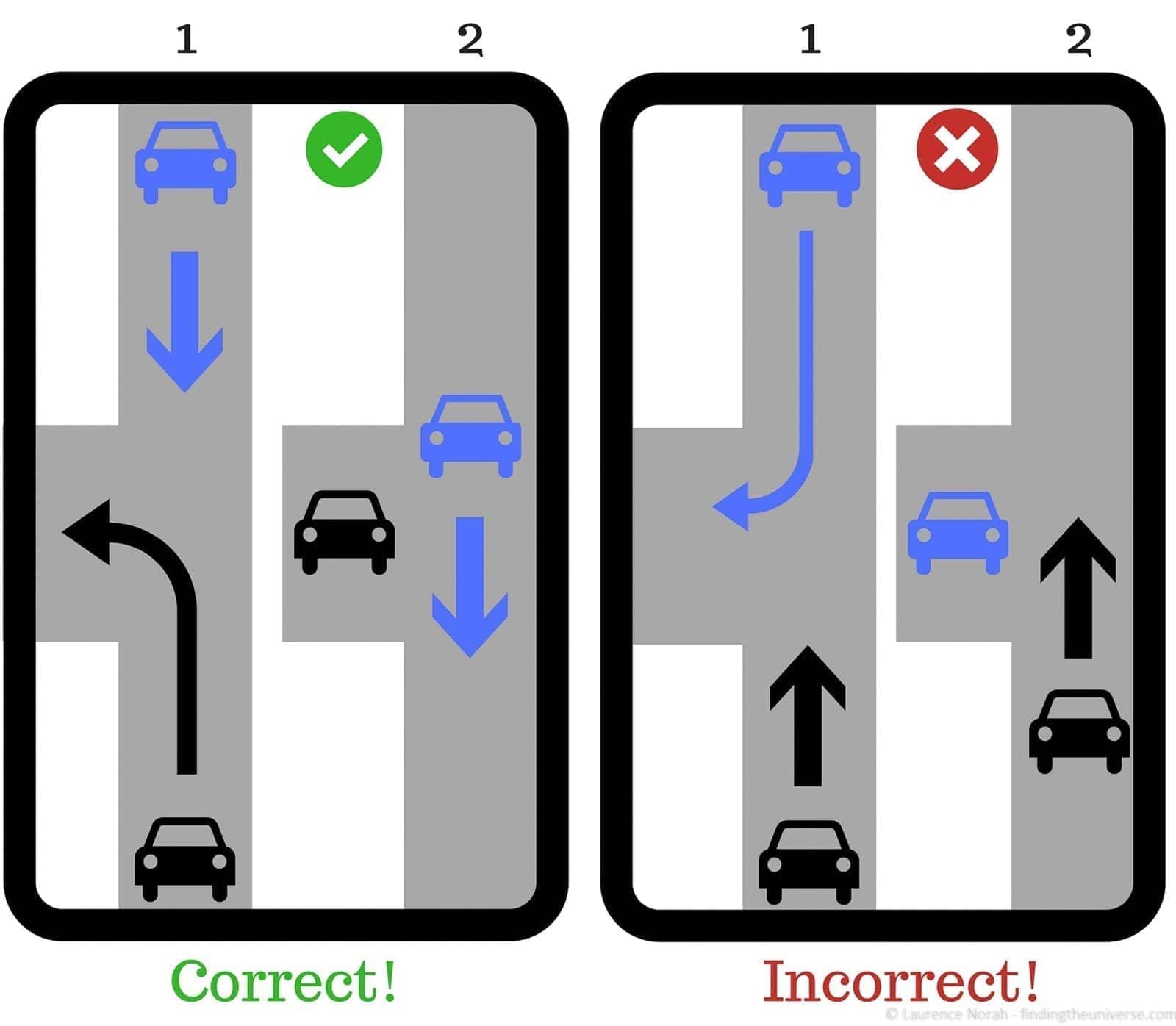 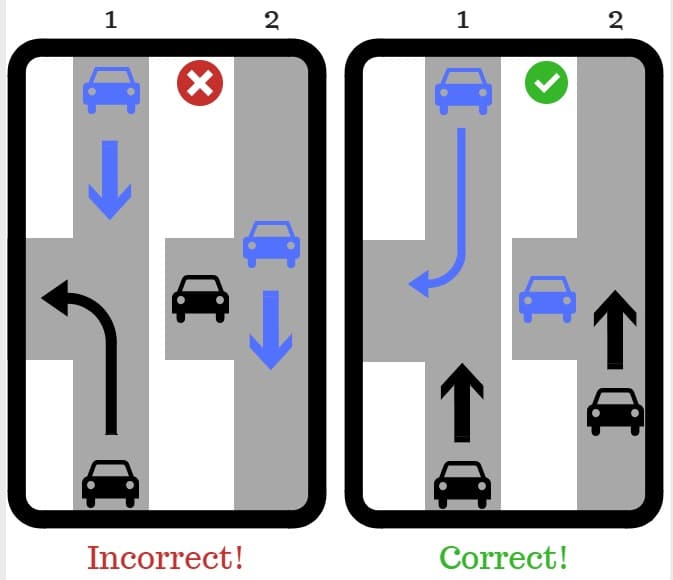 Other Rules for Passing Places

There are a few other things to be aware of with passing places.

First, if you are driving relatively slowly and other vehicles are stuck behind you, then you should use the passing places to let the traffic behind you pass periodically. You should only do this when there is no oncoming traffic. First, use your signal to indicate your intention, and then pull over into a passing place on the left. Allow the other traffic to pass, and then pull out when it is safe to do so.

Sometimes there will be multiple cars travelling in each direction. Many passing places can accommodate 2 cars so pull forward to let vehicles behind you enter.

Next, only use passing places for passing. Do not pull over on the verges of the road as this causes erosion and damage. The exception to this is when there is no passing place available, in which case you should identify a safe place to pull over and pass. It is very rare though that there won’t be a passing place on Scottish road, as they are very frequent.

Finally, never use a passing place as a parking space. Yes, the scenery may be stunning and you may want to get a photo or stop to get out of the car, but resist and wait until you get to a safe and legal place to park. There are plenty of designated parking spaces, and these are usually put in handily scenic locations.

Who has right of way on a single track road?

The next question you might have is – who stops for whom on a single track road? Often there will be multiple passing places, and if you have good visibility of the road ahead, you might see an oncoming car as well as a number of passing places that either of you can stop in.

This comes down to a mix of common sense and politeness – there’s no law that dictates this, although the UK Highway code does specify that you should give way to vehicles coming uphill where possible. So if you are driving down a hill, you are expected to pull into the first passing place you see, or reverse if possible. 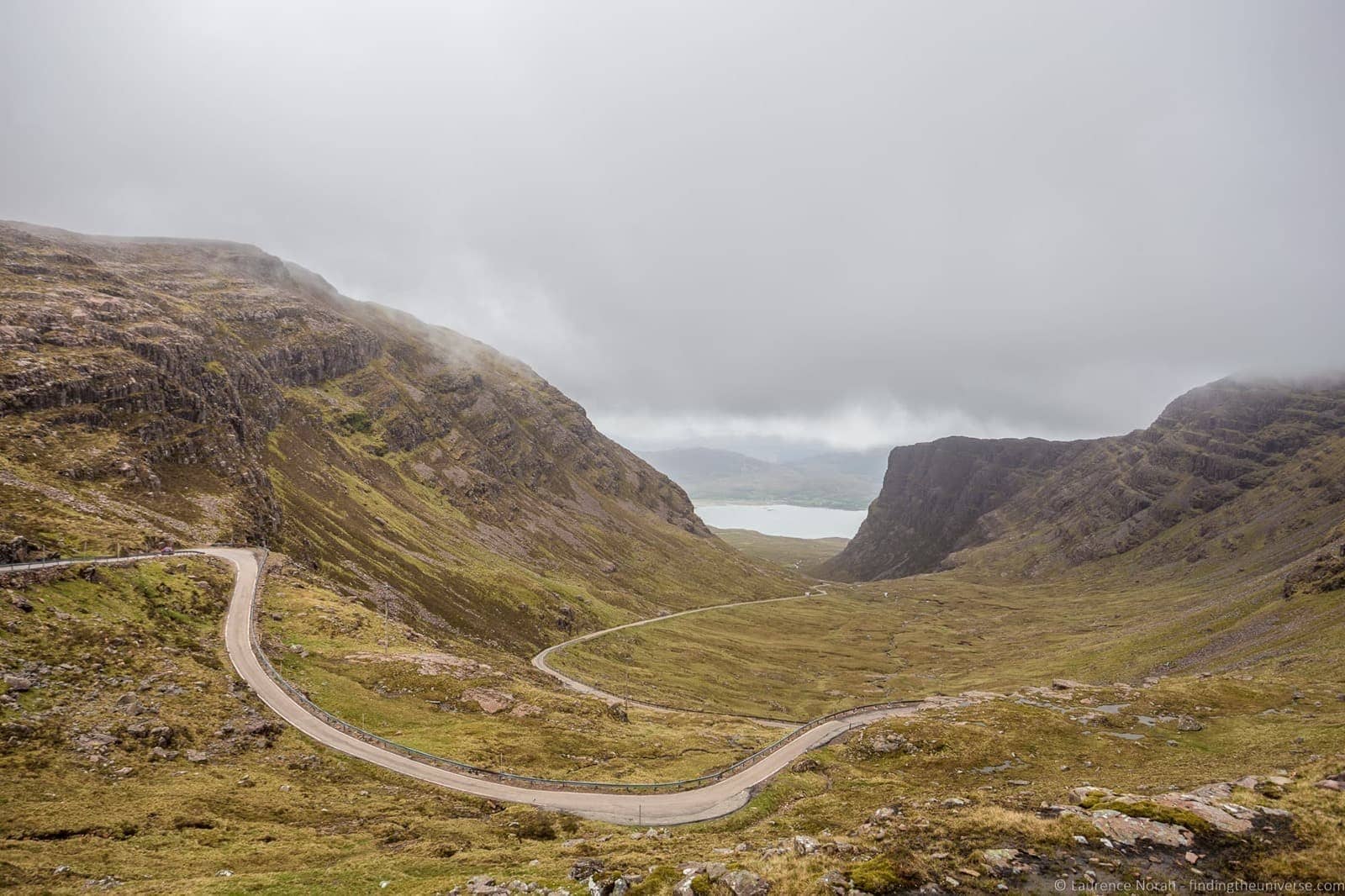 In our experience, on a flat road with good visibility, you can usually judge the speed of the oncoming vehicle and your own speed, figure out where you are likely to meet, and then pick the optimal passing space. Personally, I am not usually in a rush when driving these roads, so will likely stop at the first available passing space and then signal by flashing my lights to the other vehicle that they can proceed.

Generally it also makes sense if multiple vehicles are approaching you that you stop.

Of course, if both vehicles stop simultaneously this can result in a stand-off of British politeness. Usually in this case the first car to flash their lights will remain in place, but just play it by ear – there are no hard and fast rules!

Can I overtake on a single track road?

The only way that you can safely overtake on a single track road is if the vehicle you are following pulls over into a passing place to allow you to pass.

As previously mentioned, we definitely encourage slower drivers to pull over to let faster traffic through when it is safe to do so. This makes for a more positive experience for everyone, especially locals who will be more familiar and experienced with the road conditions, who can become frustrated being stuck behind slower moving vehicles.

Any other tips for driving on single track roads?

One big tip is the importance of knowing how to safely reverse your vehicle. Often the view of the road ahead will not be clear enough to anticipate needing to use a passing place, and two vehicles will meet at a point where one will have to back up into a passing place.

Usually the vehicle closest to a passing place will reverse, although this does depend a little on the situation – if there are multiple cars coming towards you for example, then it is polite for the single vehicle to reverse (if it is not too far).

In addition, normally it is polite for the vehicle with the easiest reversing option to do so – someone pulling a caravan that has just descended a steep section of U-turns for example would usually not be expected to back up if there is an easier option for the other vehicle.

You should also pay attention to road signs. Some single track roads have weight limits or are unsuitable for certain types of vehicle, which may apply to you if you are driving a motorhome or towing a caravan. 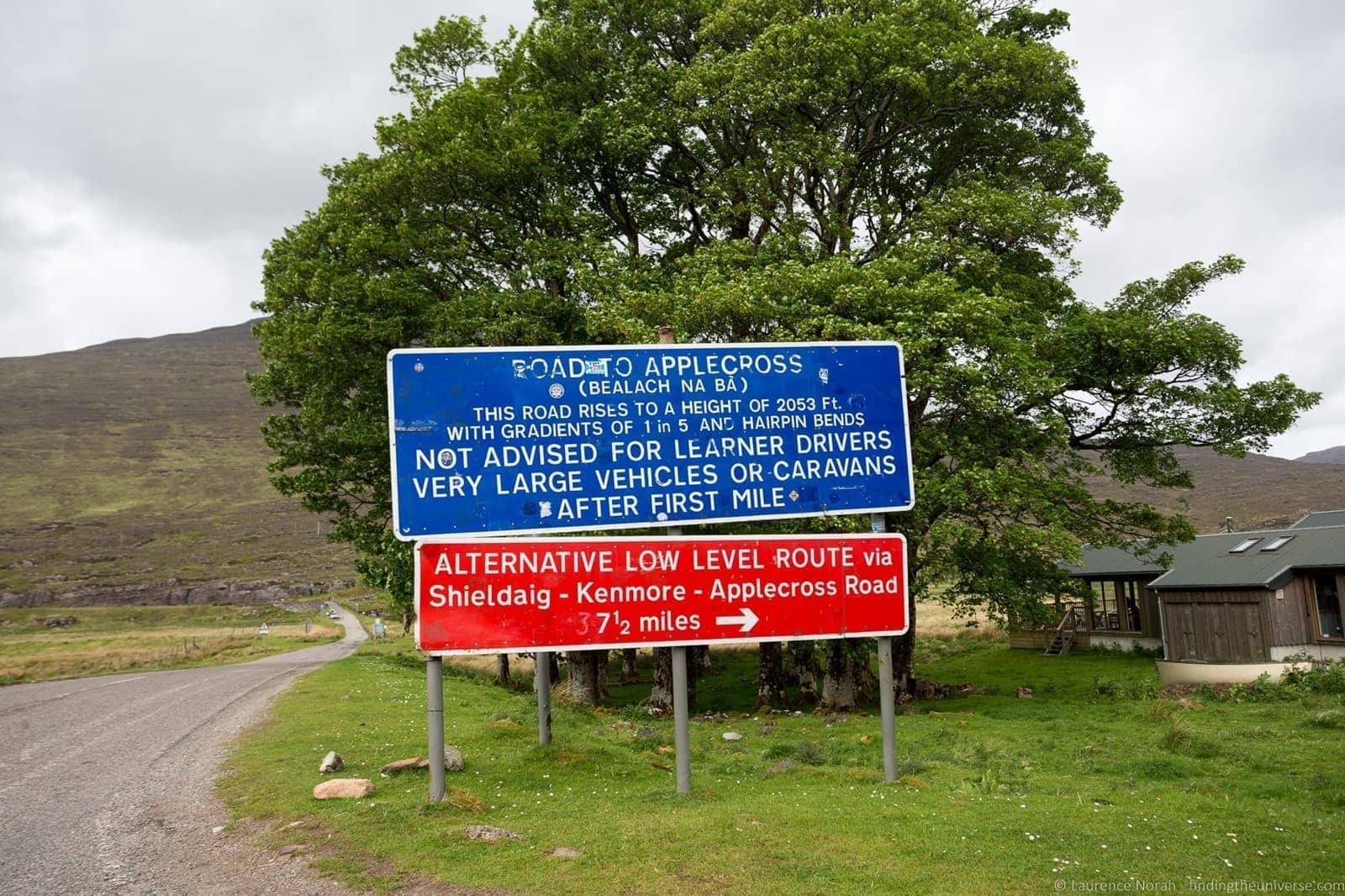 All this said, if you are driving a larger vehicle like a motorhome, or towing a caravan, you should definitely be sure you are confident reversing it on these sorts of roads before tackling them, as you might otherwise end up causing a serious traffic jam!

Are there any specific rules about driving on single track roads?

Most countries have specific guidelines regarding driving on single track roads. In the UK for example, single track roads are covered in the UK Highway Code, which contains a number of rules that cover pretty much every driving eventuality.

Give way to vehicles coming uphill whenever you can. If necessary, reverse until you reach a passing place to let the other vehicle pass. Slow down when passing pedestrians, cyclists and horse riders.”

“Do not park in passing places.”

These are fairly self explanatory and after reading this post up to this point, I would hope are easy to understand!

Hopefully this post has answered any questions you had about driving on single track roads! Before we leave you, we wanted to share some additional resources to help you plan your next road trip adventure!

And that sums up our detailed guide to driving on single track roads in the UK. We’d love to hear your comments, feedback or question if you have any in the comments below. Safe driving! 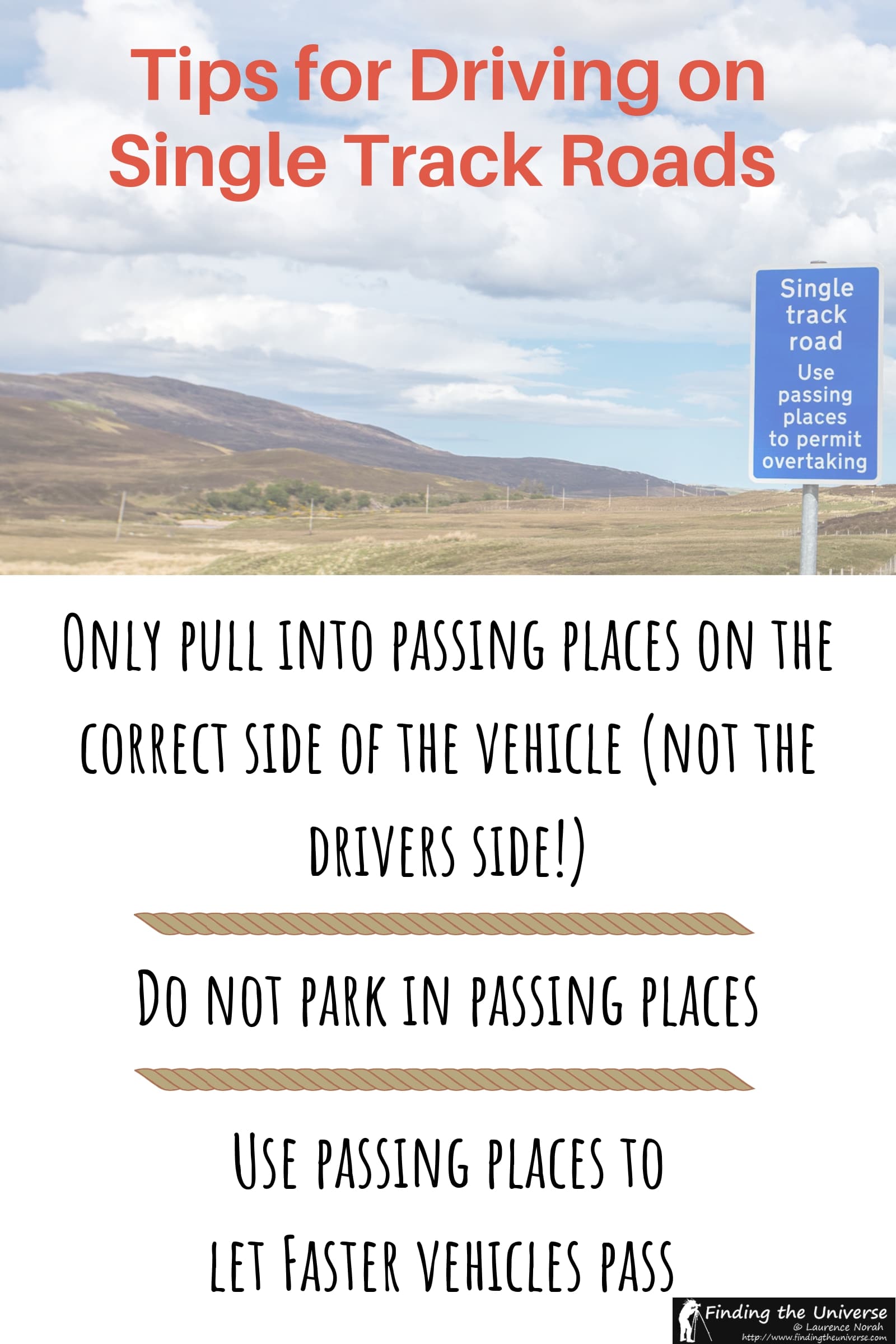